Have you ever thought about what it is like to be a course marshal at The Open? We sat down with Ian Chivers - father of GolfMagic's Matt - to learn more about the role... 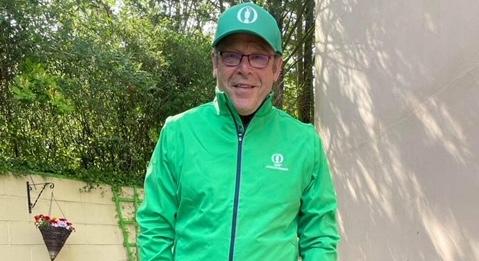 When thousands of fans flock to The Open Championship year upon year, they want to see the best players hitting the best shots at some of the world's toughest golf courses.

The Open is a world-class sporting event that requires a lot of organisation and coordination, and a lot of this is down to the hundreds of course marshals that volunteer their services each year.

During a practice round on Wednesday, you will have seen a video of Phil Mickelson dancing behind Bryson DeChambeau as he hit a drive on the 9th hole at Royal St. George's.

In the same video, you will also have seen a marshal to the right of DeChambeau, signalling for his drive and looking over at Mickelson after his little jig.

Well believe it or not, that marshal is my dad, Ian Chivers.

I can't describe how much my family and I have laughed at this video, but it just goes to show what the perks and benefits of being a marshal can bring: rubbing shoulders with the biggest players in the world.

"It is a wonderful privilege and an unforgettable experience," said Ian.

"Each time The Open comes to Royal St. George's, local clubs are invited to seek volunteers. My club is about seven miles from the course and we have supplied many volunteers.

"St. George's looks magnificent. The rough is formidable. I have played the course several times and for a high handicapper, it is a severe challenge. However, the whole aura of the place is incredible. You feel you are somewhere very special."

It is always such a special occasion when The Open comes back to Sandwich and the venue has produced so many memorable and unexpected winners such as Greg Norman, Ben Curtis and Darren Clarke.

As much as it is great to be inside the ropes, marshals do have a very important job in keeping the crowd calm and helping the players as much as possible in finding their balls and accompanying them around the course.

I've enjoyed listening to my dad's stories from each day he has attended so far, whether a practice day or championship day, and I am envious of all the superstars that he has met.

"As marshals we control the tees, ensuring there is silence and the entries and exits are easily accessible to the players. We ensure that it is safe to play," added Ian.

"On the fairways, we marshal crossing points and provide ball spotters. We marshal the grandstands, ensuring access is safely maintained. We also escort the players to the next tee.

"We have close contact with the players and on practice days most of them appreciate a chat. The top American players are exceptionally friendly and engage with the marshals and the players.

"I had a really good and friendly conversation with Phil Mickelson. Kevin Kisner arrived unexpectedly on the tee during practice and was very chatty about how the other players had hit from that tee. Tony Finau also chatted generally about the course and the anticipated weather."

Ian is a member at Walmer and Kingsdown Golf Club, a course which is a short drive along the coast from Royal St. George's and is situated on top of the white cliffs that look towards France.

As you can tell, the southeast coast of Kent is blessed with a fantastic stretch of golf courses with Princes Golf Club and Royal Cinque Ports surrounding this week's major venue.

In a packed leaderboard led by Louis Oosthuizen as it stands after 18 holes, it is tricky to call who will lift the Claret Jug at this point, but if one thing is for sure, Ian will have one of the best seats in the house come Sunday afternoon.

NEXT PAGE: WILL ZALATORIS WITH THE BEST AND WORST SHOTS OF DAY ONE AT THE OPEN!