Bryson DeChambeau "REGRETS" saying "THE DRIVER SUCKS" at The Open

Bryson DeChambeau takes to his Instagram page to issue an apology over the comments he made about his Cobra driver... 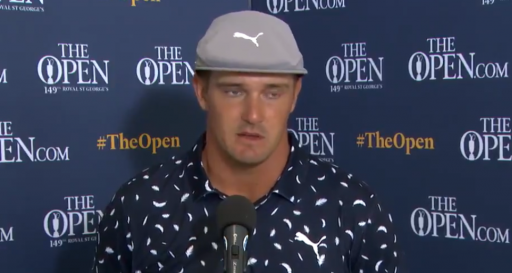 Bryson DeChambeau says he "regrets" the comments he made about his Cobra Radspeed driver following a frustrating round of 1-over 71 on day one at The Open.

DeChambeau, 27, ranted about his driving performance after finding just four of 14 fairways during his first round at Royal St George's.

The 2020 US Open champion went as far to say "the driver sucks," much to the shock of his Cobra Golf team and golf fans around the world.

With time to reflect on his post-round press conference earlier in the day, DeChambeau posted on Instagram just after 10.30pm on Thursday evening to apologise for his rant.

"My frustration and emotions over the way I drove the ball today boiled over.

"I sucked today, not my equipment. Cobra and I have worked together for over five years and they are some of the hardest working people in the golf industry and make an incredible product.

"Their team is like family to me, especially Ben Schomin who has been there for me every step of the way since I started my career.

"I deeply regret the words I used earlier. I am relentless in pursuit of improvement, and perfection.

"Part of that causes me to become outwardly frustrated at times. With the new speeds I am obtaining, my game is a constant work in progress and so is controlling my emotions."

DeChambeau carded a round of 71 on day one to lie seven shots off the pace set by Louis Oosthuizen.