Are enough PGA Tour professionals shouting 'Fore' in 2021? Some golf fans have had enough now... 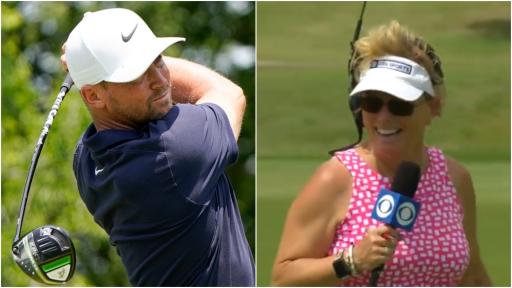 Golf fans have been reacting to Alex Noren's errant tee shot nearly clattering into on-course commentator Dottie Pepper at the AT&T Byron Nelson at TPC Craig Ranch at the weekend.

Noren held every chance of earning his maiden PGA Tour title heading into the weekend, but ended up shooting disappointing rounds of 70 and 74 to fall out of contention into tied 21st.

But despite not winning the tournament, Noren still made the headlines on social media for his tee shot that nearly struck the LPGA Tour legend on the fly.

Golf fans were fuming that the Swede did not even shout 'FORE' - something that has become an all-too frequent flaw among many of the world's best players in 2021.

Check out the video clip below of Noren's drive coming within inches of hitting Pepper, who did not even flinch.

"The Tour should be embarrassed putting this on when there was no shout of fore," tweeted one irate golf fan.

"If it hit her and killed her instead he would have just watched it. Like seeing a pedestrian and being able to warn them with the horn but running them over anyway! Joke."

Another tweeted: "Automatic DQ if you hit Dottie."

"Disgraceful etiquette from a golf professional," tweeted one golfer. "It costs nothing to shout 'Fore'. But sadly this is normal from PGA in America where you just might get the pro sticking his arm out. Can you imagine the damage the ball would have caused if it had hit Dottie Pepper."

"Do they ever yell Fore," questioned another golf fan.

One golf fan wasn't having any of it, though.

"She's standing on the fairway pretty much," tweeted one confused golf fan. "It's her fault."