Tiger Woods believes Bryson DeChambeau's approach to golf is "unprecedented" in the sport and thinks he can go on to add more major trophies to his cabinet. 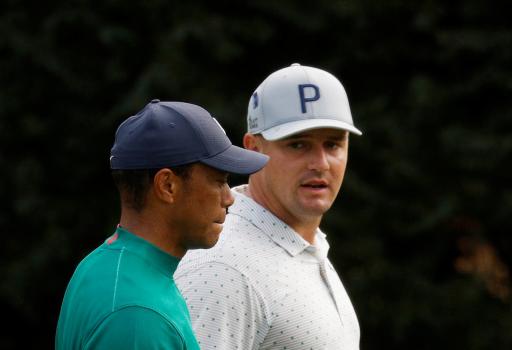 Tiger Woods believes Bryson DeChambeau will go on to win many more events during his PGA Tour career and add more major championships to his trophy cabinet, after capturing his first at the US Open last year.

When DeChambeau went on a quest for speed and distance, there were certainly more doubters than believers, but he has proved to the world that hitting the ball further than his opponents gives him a serious advantage.

After claiming his maiden major at Winged Foot in 2020, we have even seen other players - such as Rory McIlroy - attempt to chase a few extra yards and adapt their own game.

In an interview with Bridgestone Golf that was published in April, 15-time major champion Woods spoke extremely highly of DeChambeau and revealed he is impressed with how he has changed his approach to the sport.

"I think what Bryson has done is unprecedented in the game," said Woods. "No one has changed their entire philosophy and how they’ve gone about how they approach golf and he came into it with a different mindset to begin with.

"He came in with a more technical science type of attitude and he’s now expanded on that and been able to utilise all the different types of technology that’s available to him and what he’s done - he’s proven that it works and to go out on that limb is very courageous."

Woods went on to say that although DeChambeau uses a calculative approach, he is still very much a "feel" player.

"As sciency as he approaches the game, he’s still a feel player," added Woods. "He just equates his feel to his numbers instead of different shots whereas a lot of players like myself are handsy and hit shots differently. Bryson’s still a feel player but he does it in his own way and that’s the thing, there’s nothing wrong with doing things your own way and he’s courageous for doing it and I think the future is open to him.

"He can take this game to levels that we would have never guessed. We’d have never guessed someone would be hitting the ball as far as he does or approach it with the attitude he does or morph his body the way he has and he’s proven it. He’s won a US Open. The future is so bright and he’s right in his prime. He can win so many events and so many more majors, it’s going to be fun to watch."

After watching the interview and hearing what Woods had to say about him, DeChambeau said how inspiring it was to have someone of Woods' calibre speaking so highly of him.

"From the greatest of all time, that’s pretty special," said a humbled DeChambeau. "He’s been right on a lot of things, I hope he’s right on that one. It’s inspiring, it’s even more inspiring."

"There’s a lot more work to be done but it’s great that I have support like that and I always appreciate his words. He has inspired me to do this and there’s more to go."

DeChambeau will attempt to win his second major at this week's PGA Championship at Kiawah Island, where Collin Morikawa defends the title he won last year.

NEXT PAGE: How much K.H. Lee and every player won at the AT&T Byron Nelson