Brooks Koepka was working on his wedge game as he prepares to play left-handed in a charity match. 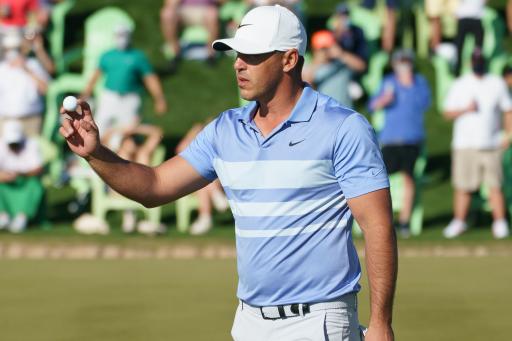 Brooks Koepka has sent out a warning to Barstool Sports founder Dave Portnoy by posting a video of of him getting "dialled in" for their charity match by hitting some left-handed shots with a wedge.

Koepka posted a video hitting a full wedge shot with his opposite hand, along with the caption: "Getting those numbers dialed in for the portnose match. @bkoepkafoundation will be able to do a lot of good with the 250k @stoolpresidente."

WATCH KOEPKA GET SOME LEFT-HANDED PRACTICE IN BELOW:

The match was created after Koepka poked fun at Portnoy on Twitter, suggesting he could beat him whilst playing with the wrong hand and Portnoy was quick to take the four-time major winner up on his offer.

After missing the cut at The Masters, Koepka took a month away from the PGA Tour to continue to strengthen his knee after a recent surgery.

The American made his return to action at last week's AT&T Byron Nelson at TPC Craig Ranch, but his two-day score of 3-under par was not enough to make the cut.

Koepka revealed his knee is still not 100% and that it will take some time before he considers himself fully recovered.

This week, Koepka will tee it up at Kiawah Island for the second major of the year, the PGA Champipnship, where the 31-year-old will look to win the tournament for a third time.