Jon Rahm is stepping up his preparations for the Ryder Cup at the Fortinet Championship this week. 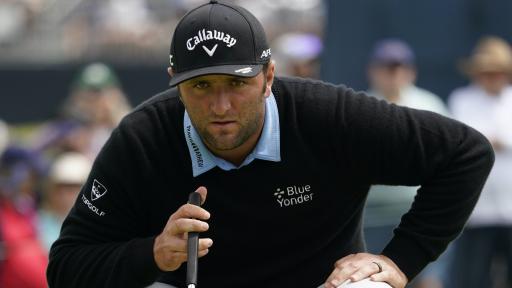 Jon Rahm surprised a spectator on the PGA Tour on Thursday as he prepared to hit an approach shot at the Fortinet Championship.

Rahm was the strong favourite heading into the event at Silverado Resort and Spa in Napa, as he stepped up his practice ahead of the Ryder Cup at Whistling Straits.

The World No.1 found himself in a tricky position to the left of the fairway on the first hole, which was his 10th hole of the day and he was 1-under-par to this point.

As he and his caddy weighed up their options on hitting the ball to the green, a spectator stood to the right of his ball and had no idea that Rahm was behind him.

As soon as the man realised that the World No.1, US Open-winning Spaniard was stood behind him, he was very apologetic and he couldn't believe that he was unaware of his presence.

Posted by Skratch Golf, it is a very funny video and it was an honest mistake from the man. Fortunately, Rahm and his caddy assured him that there had been no harm done.

The 26-year-old went on to make a par at this 440-yard par-4 to maintain his score of 1-under-par for the tournament, which was formerly known as the Safeway Open.

RELATED: WHAT'S IN THE BAGS OF TEAM EUROPE FOR THE RYDER CUP AT WHISTLING STRAITS?

Rahm had to withdraw from the Fortinet Championship Pro-Am on Wednesday due to a stomach illness, but he was back and fit enough to start the tournament on Thursday.

Once the event concludes on Sunday, Rahm will set off to Wisconsin and meet up with his European teammates as they bid to retain the Ryder Cup.

NEXT PAGE: THE BEST FOOTJOY SPIKELESS GOLF SHOES FOR YOU TO TRY BEFORE THE RYDER CUP!