Ian Poulter and Anthony Joshua were advertising for the Ryder Cup but also the Brit's big fight with Oleksandr Usyk. 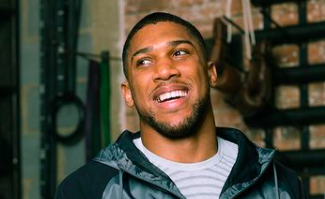 Sky Sports have a big weekend ahead next weekend as Europe take on America in the Ryder Cup at Whistling Straits in Wisconsin.

However, Sky Sports Box Office is also getting prepared for a massive weekend as on September 25, World Heavyweight champion Anthony Joshua is taking on Oleksandr Usyk.

The Ukrainian is planning a raid of the heavyweight division to take all of the belts, but Joshua will have other thoughts when they face off at the Tottenham Hotspur Stadium next Saturday.

The popular sports broadcaster has a lot on their hands, so they combined the Ryder Cup and a world heavyweight title bout in one advert, acquiring the services of Joshua himself and Ian Poulter.

RELATED: WILL RORY MCILROY LEAD EUROPE TO VICTORY AT THE RYDER CUP IN WHISTLING STRAITS?

Poulter is never shy from the cameras and he is always up for taking part in entertaining features, and this advert is no exception.

At the start of the promotional video, Joshua is seen taking a swing with a driver at the fight venue and the ball flies all the way to America.

This is when Poulter appears. The ball flies towards him and he punches the golf ball with a pair of boxing gloves on, before staring down the camera in true Postman style.

It is set to be a huge weekend for British and European sport. In both Joshua's bout and Europe's quest to retain the Ryder Cup on away soil, there is a lot at stake.

Poulter received a captain's pick from Padraig Harrington, but with his 14-6-2 tally at the tournament and an unbeaten singles record, he is bound to deliver yet again for Team Europe.

NEXT PAGE: WATCH: KEVIN NA WALKS IN PUTT WITH CANE AHEAD OF 19TH PGA TOUR SEASON