Golf fans have praised Ben An for seeing the funny side of his nightmare 11 at the iconic 17th hole at TPC Sawgrass. 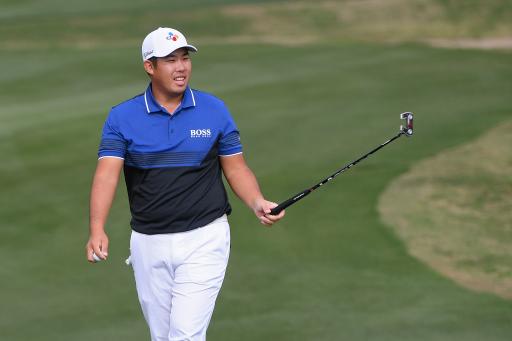 Byeong Hun An, better known as Ben An, has been praised by golf fans on social media after he saw the funny side of his shocking score of 11 at the par-3 17th hole at TPC Sawgrass.

Four of those balls belonged to An, who had an absolute nightmare and walked away with one of the highest scores that the 17th hole has ever seen (the highest being a 12).

WATCH AN'S SHOCKER AT 17 BELOW:

That's the second-highest score ever on the 17th in the ShotLink era. pic.twitter.com/1nZ8a6HvY4

Now for many golfers, making such a high score at one of the most famous holes in golf would have been enough to come up with some sort of excuse to withdraw, especially as it led to a score of 11-over par for the day.

Even that wasn't the worst score of the day though, with Henrik Stenson beating it by two at 13-over.

An's nightmare at 17 didn't take long to start circulating on social media and Golf Channel then posted a video of it on Twitter along with the caption: "Tag a buddy who would card an 11 on No.17."

Instead of locking himself in his hotel room crying about it, An was able to see the funny side and made golf fans laugh by tagging himself in the tweet.

An then followed up with another tweet, which read: "We all have bad days in our life and we just have to learn to move on... But it was a horrendous f—ing tee shot on 17th."

We all have bad days in our life and we just have to learn to move on.....