DeChambeau may have failed to capitalise on the eagle chance but it was the simplest of birdie putts after he treated the par-5 16th like a par-4 on Thursday. 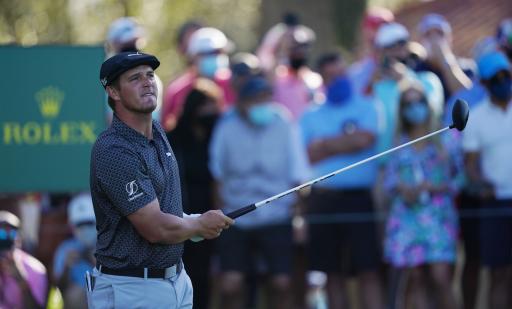 Bryson DeChambeau was proving why his distance and power can be so useful on the PGA Tour once again after he left himself with a 9-iron into the par-5 16th hole at TPC Sawgrass.

It was a solid opening round from DeChambeau, who shot a 3-under par round of 69 to get underway at The Players Championship and although TPC Sawgrass requires a lot more than long-game, the 27-year-old impressed on the 16th hole.

The 16th hole measures 515-yards long and DeChambeau bombed his drive 333-yards off the tee and then hit a 175-yard shot with a 9-iron to leave himself with a fairly short 13-foot eagle opportunity.

Unfortunately the 27-year-old couldn't capitalise, but due to being so close to the hole, DeChambeau left himself with one of the simplest birdies he would make all day.

WATCH DECHAMBEAU'S POWER ON DISPLAY AT 16 BELOW:

"Turning par-5's into par-4's," said World Long Drive champion Kyle Berkshire on Instagram, who has been working alongside DeChambeau to help him increase his speed.

DeChambeau went on to add another birdie at the next hole, the iconic par-3 17th, where birdies were hard to come by on Thursday.

In fact, there were 35 balls put in the water at 17 during the opening round, which is yet to conclude after play was suspended due to darkness, meaning that number could still increase.

It's the second-most number of balls put into the water at that hole in a round in the history of The Players Championship, since ShotLink came around.

NEXT PAGE: Viktor Hovland survives DQ SCARE and given 2-shot penalty at The Players