Brendon Todd was on the receiving end of the popular "one of us" trends on social media during the final round of The Players Championship. 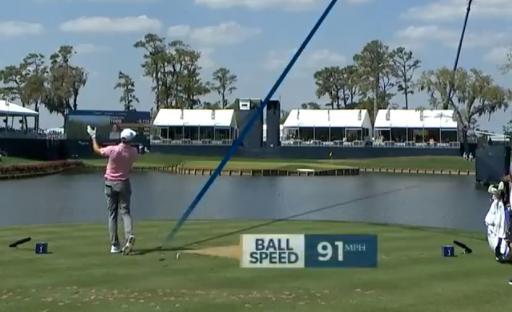 Brendon Todd had a brilliant reaction to his woeful shank at the iconic par-3 17th at TPC Sawgrass on Sunday.

It was a fairly solid week for the American who finished in a tie for 35th place at 3-under par, earning a tidy $73,125, but it could have been even better for Todd had he not walked off of the 17th hole with a triple-bogey 6.

Before stepping on to the 17th tee, Todd had pieced together four birdies and one bogey and was 3-under par for the day, but then the 35-year-old fell victim to the water surrounding the 17th hole, as so many did throughout the tournament.

Unlike the majority of the rest though, Todd didn't land his ball on the green and watch it roll off, instead, he produced a shank that even he had to laugh about.

WATCH TODD LAUGH OFF HIS SHANK AT 17 BELOW:

Brendan Todd, one of us! pic.twitter.com/bJQkv4deBd

After letting go of his club and then having a laugh to himself over the shot he had just produced, Todd then went to the drop area to take his third shot, which he put to the fringe of the green.

Unfortunately it took Todd another three shots until he finally found the hole for a triple-bogey, but he did bounce back with a birdie at the last to finish 1-under for the day.

It didn't take long for Todd's shank to start circulating on social media, with the popular "one of us" trend being thrown about by golf fans. who enjoyed seeing a PGA Tour star hit a shot that is all too familiar with them.

NEXT PAGE: Justin Thomas earned the biggest payday of his career at The Players Championship