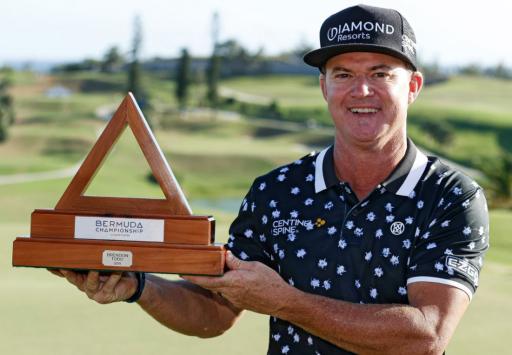 Brian Gay punched his ticket to the 2021 Masters after he claimed his first victory since 2013, by winning the Bermuda Championship at Port Royal Golf Course.

The win for the 48-year-old not only ends his seven-year winless drought, but also gives Gay a two-year exemption on the PGA Tour.

Gay shot a 7-under par final round of 64 on Sunday to finish the tournament 15-under par and level with Wyndham Clark, who is still seaching for his maiden PGA Tour victory.

The tournament was forced to a play-off and with Clark only managing a par at the first extra hole, Gay's birdie was enough to earn his fifth PGA Tour title and his first since the 2013 Humana Challenge.

"It's a crazy game, you never know what's going to happen," Gay said. "It's been a pretty long slump since the quarantine and been working on trying to get things back together and kind of came together this week."

Gay found four birdies on the front nine, with a blemish at the par-3 8th to make the turn 3-under and the American added four more birdies over his next seven holes.

A bogey at the par-5 17th put Gay under pressure, but he bounced back with a birdie at the last, while Clark birdied seven of his opening 11 holes, but lost the lead when he made a bogey at 16.

Watch Gay's brilliant approach shot to set up a birdie at 18 in the video below:

A beauty when he needed it most.@BrianGayPGA dials up a dart on 18 to make birdie and move into a tie for the lead. #QuickHits pic.twitter.com/BFRb4dHDrA

Ollie Schniederjans finished in third place at 13-under par, while Denny McCarthy, Stewart Cink, Matt Jones and Doc Redman all shared a tie for fourth.

NEXT PAGE: Golf in line for "reprieve" from England's Thursday Covid ban