Phil Mickelson is concerned that Tiger Woods is after his title of golf's oldest major winner, but that should be safe for a few years yet... 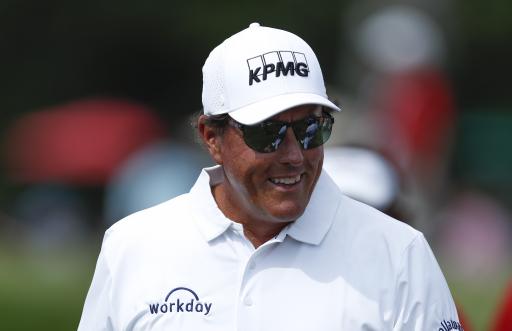 Phil Mickelson was as excited as anyone to see the footage of Tiger Woods hitting golf balls, the most momentous update of his progress so far.

Woods was involved in a serious car crash in February and he required surgery to serious injuries in his legs. He has been rehabilitating since.

There have been various sightings of him walking unaided and applying pressure to his injured right leg, and he still needs a cast to keep it protected.

He is also wearing the cast in the video where he is hitting balls. Unsurprisingly, this footage made the golf world explode with excitement.

Mickelson, a six-time major champion and golf's oldest ever major winner, was one of many players to express their delight at Woods' return to the driving range.

As I’m hanging in Montana, it’s great to see Tiger swinging a golf club again. I know he can’t stand me holding a single record so I’m guessing HE wants to be the oldest to ever win a major. I’ll just say this. BRING IT!

However, he laid down a gauntlet to the 45-year-old and said he won't give up his history-making accolade without a fight.

"As I’m hanging in Montana, it’s great to see Tiger swinging a golf club again. I know he can’t stand me holding a single record so I’m guessing HE wants to be the oldest to ever win a major. I’ll just say this. BRING IT!" Lefty tweeted.

However, as his sister Tina reminded him in the replies, Woods would have to wait a few more years if he is to beat Mickelson's record as golf's oldest major champion.

Lefty was 50 when he incredibly won the PGA Championship at Kiawah Island in May and Tiger is currently 45 years old. Even if Woods didn't return in 2022, he would still need to wait another five years to surpass the 50-year mark in his life.

Mickelson stood corrected but nonetheless, it would be great to see these legends of the game battle it out one last time, but this will rely on Woods returning to full fitness and full playing ability.

Between them, they have 127 PGA Tour wins and 21 major wins to their name. We have been blessed with their presence in the game and as we have seen from both of them in 2021, their hunger to achieve greatness has not wilted.