The Ryder Cupper shared the reason why he respects the Northern Irishman so much after a poor finish in Dubai. 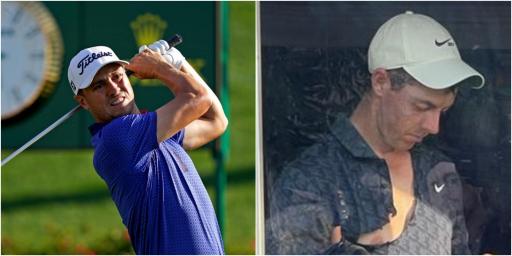 Rory McIlroy appeared to let the frustration get the better of him again this weekend.

The Northern Irishman is no stranger to heads gone moments as over the years there have been a few incidents of anger.

He's snapped his club at the Zozo Championship in Japan on the PGA Tour, then launched his club into a pond at Doral.

Up by two shots with four to play at the season-ending DP World Tour Championship in Dubai last week, this was McIlroy's tournament.

Until it wasn't. A stroke of misfortune at the 15th at Jumeirah Golf Estates saw him get exceptionally unlucky. It led to a bogey.

His wedge approach was dialed. So much so that it smashed off the flag. McIlroy then made bogey at 16, then again at 18.

This was a blow-up of epic proportions, really. And it showed. McIlroy, 32, directed his anger towards his Nike shirt.

He was pictured looking at his phone afterwards with the large tear visible across his chest.

How differently he left Dubai compared to Collin Morikawa.

Morikawa, 24, left millions of dollars richer and humbled by his success. McIlroy? Hot and bothered.

McIlroy fans were quick to cast judgement. Some suggested he choked again, others claimed he is back. The fire is there again.

One person who absolutely loved what they saw from McIlroy was Justin Thomas, 28.

I love this. @McIlroyRory works his ass off and expects highly of himself, and is frustrated when it doesn't go well. Never treats people with disrespect, never makes a fool of himself, just plays with fire and passion. Why he's as successful as he is and one of my favorites https://t.co/wFkEbxnBZO

"Never treats people with disrespect, never makes a fool of himself, just plays with fire and passion," Thomas writes.

Fire and passion with McIlroy? Surely never a truer word has been spoken.

Thomas has played on the PGA Tour in the fall swing but for the most part he is taking some time away from the game.

He did, however, share his delight when a video was released by Tiger Woods swinging a club again.

But, I think I love this more https://t.co/t3gSw2KEAc