Brooks Koepka shot a 1-under par round on Thursday at the AT&T Byron Nelson. 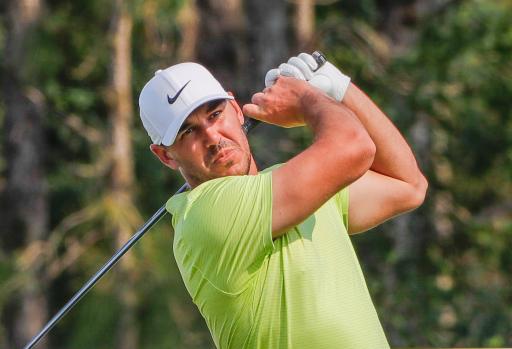 Brooks Koepka revealed he is "still not 100%" as he continues to recover from a knee surgery, but it has improved a lot since he missed the cut at Augusta last month.

The four-time major winner looked unlikely to take part in The Masters in April and rumours were going around the PGA Tour suggesting Koepka was facing six to eight months on the sidelines.

Koepka felt as though he could play through the pain to take part in the first major of the year and although he had to adopt a Spiderman-like pose to read the greens, he was able to be a part of the action.

Unfortunately for Koepka he would miss the cut and he has spent his time since then working with his team on getting the strength back in his knee, but it will be a while until it has fully healed.

Returning to action at this week's AT&T Byron Nelson at TPC Craig Ranch, Koepka shot a 1-under par opening round, which he is likely to be disappointed with given how easy the course is playing.

Before teeing it up on Thursday, Koepka spoke to the media and provided an update on his recovery process.

"I still can't squat down, get into a catcher's position or fully bend down. It's a lot better than it was at Augusta, but it's still not completely normal.

"Yeah, I mean, it feels really good. Every once in a while I'll have a swing where it doesn't get off. I don't load on my right side and stay on it. I get off it. That happens with the longer clubs, mainly driver.

"But everything from about 7-iron in, no problem. There is just more load the longer the club, and I'm pleased with what I've been able to do. Between Dr. Elattrache? (Phonetic) Heather, Marc Wahl, my trainer, Derek, it's all been -- everyone is very happy with it.

"You know, months ahead of schedule, so it's just nice to be back out and being able to play golf and actually hit shots that I want to hit, unlike I was doing at Augusta."

NEXT PAGE: Rory McIlroy's return to "DANGEROUS" form a delight for Padraig Harrington