Jordan Spieth has used Titleist irons for all of his professional career and he has achieved great success since teaming up with the brand. 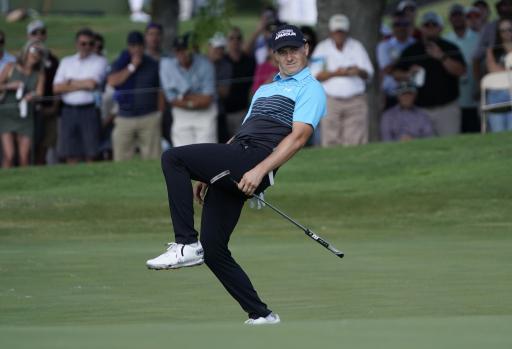 Jordan Spieth was allowed to test a set of Titleist irons that are in the pipeline, receiving a sneak peek into what the company has in store for the future.

Titleist posted a picture to their Instagram page of Spieth and fellow PGA Tour player Will Zalatoris appearing to be testing some new irons, which has got golf fans excited.

The three-time major champion has played with Titleist irons since he turned professional in 2012 and he has used the Scotty Cameron Circle T 009 putter for a number of years now.

Spieth has previously said that he needs to gain full trust in a set of clubs or a driver before he adopts them in his bag. He even stated once that he would need up to 3,000 practise shots to get comfortable with a new club.

The 12-time PGA Tour winner clearly prefers longevity in his equipment and club choices, which was evident again this week at the AT&T Byron Nelson as he changed his ball for the first time in over five years.

Spieth has changed from the 2015 Titleist Pro V1x golf ball to the 2021 version of the Titleist Pro V1x. Although it was a long time before he changed ball, his form did not relent on Thursday at TPC Craig Ranch.

The Texan fired a 9-under-par round of 63 to share the first-round lead with J. J. Spaun. Spieth made five birdies on the front nine but the highlight of the round came on the par-5 18th hole, where he rolled in a 55-foot putt for an eagle.

NEXT PAGE: JORDAN SPIETH EAGLES THE 18TH HOLE TO LEAD AT&T BYRON NELSON ON DAY ONE