Brooks Koepka is now a doubt for the Ryder Cup and his charity match with Dave Portnoy has been postponed. 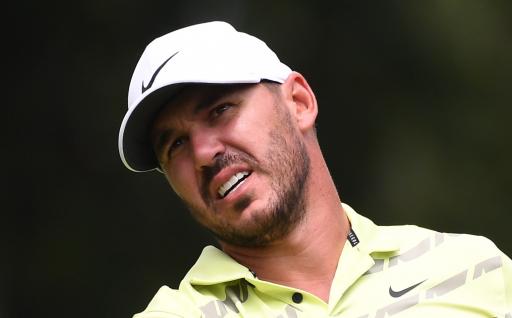 Brooks Koepka has been forced to withdraw from the Tour Championship on the PGA Tour after injuring his wrist when striking a ball from a tree root on the 10th hole during round three.

The injury now casts doubt over Koepka's appearance at the Ryder Cup in three weeks time.

This is the moment @BKoepka hurt himself which later resulted in him having to drop out of the #TourChampionship pic.twitter.com/IPhSfVKBcL

Koepka was 3-over par on the day and 1-under par for the tournament when he withdrew at the 12th hole.

Although he has withdrawn from the Tour Championship, Koepka still receives $395,000 for finishing 30th in the 30-man FedEx Cup finale.

Brooks Koepka has withdrawn from the @PlayoffFinale with a left wrist injury. pic.twitter.com/8R0q0I1tKI

The Match is officially postponed. @BKoepka conveniently planted a root in the ground. He isn’t the first guy to duck me and he won’t be the last. pic.twitter.com/HlcvsIbrYm

The match was scheduled to take place on Tuesday at Liberty National and Koepka was going to play left-handed.

A new date for their match has yet to be finalised.

NEXT PAGE: GOLF FAN PICKS UP BRYSON'S BALL AT THE TOUR CHAMPIONSHIP AND RUNS AWAY WITH IT