Joaquin Niemann records FASTEST EVER ROUND at the Tour Championship

Niemann finishes in 29th place but he races around in East Lake to set a new Tour Championship record for the quickest ever round. 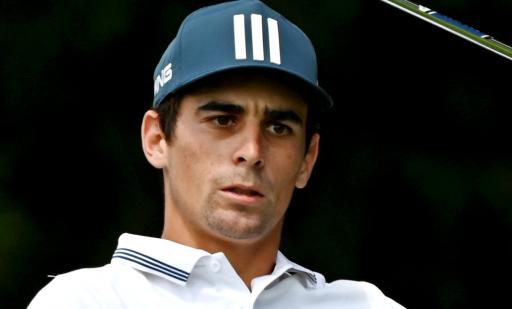 Joaquin Niemann recorded the fastest ever round at the Tour Championship on the PGA Tour by whizzing round East Lake in 1 hour 53 minutes.

Playing on his own, Niemann carded a 2-over 72 to finish 4-over par for the week in 29th place of the 30 players in the field, with Brooks Koepka withdrawing in round three due to injury.

The round breaks the previous PGA Tour record set by Kevin Na in the final round of the Tour Championship in 1 hour 59 minutes.

Niemann was behind Na's record on the front nine but he then seriously picked up the pace coming home to break the record.

So you're telling me there's a chance... pic.twitter.com/5IWkeCDOll

He did nearly fall into the water though!

The crawl of shame. pic.twitter.com/B2XnBzNTkS

Niemann finishing a round in 1:53 and shooting 72 would be a fantastic time to note that we don't need 5 hour rounds on Tour.

Azinger: "If he'd taken his time and shot 64 he might have made another couple hundred grand."

The fastest ever recorded round on the PGA Tour was 1 hour 29 minutes by Wesley Bryan in the final round of the 2017 BMW Championship.

Sebastian Soderberg recorded the fastest round in European Tour history last year when playing the final round of the Dubai Desert Classic in 1 hour 36 minutes en route to carding a round of 75.

NEXT PAGE: BROOKS KOEPKA WDS FROM THE TOUR CHAMPIONSHIP DUE TO INJURY