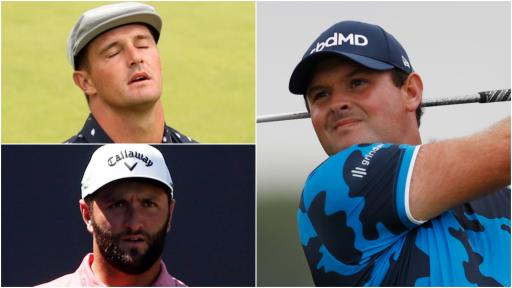 Bryson DeChambeau and Jon Rahm have been forced to withdraw from the Men's Olympic Golf Tournament at the 2020 Tokyo Games after testing positive for Covid-19.

"I am deeply disappointed not to be able to compete in the Olympics for Team USA," said World No.6 DeChambeau.

"Representing my country means the world to me and it is was a tremendous honour to make this team. I wish Team USA the best of luck next week in Tokyo.

"I will now focus on getting healthy, and I look forward to returning to competition once I am cleared to do so."

Reed, who will now become a two-time Olympian, said: "I am so excited to have the opportunity to represent our country and be a part of Team USA in Tokyo.

"I wish Bryson nothing but the best, and I know how disappointed he is to not be able to compete, and I will do my best to play my best and represent our country."

"We're obviously disappointed for Bryson, as we know how much he was looking forward to representing the United States in his first Olympics," said Andy Levinson, USA Golf Executive Director.

Rahm will now be replaced by compatriot Jorge Campillo in the field.

For World No.1 Rahm, it marks the second time in two months where he has tested positive for Covid-19.

Rahm was forced to withdraw from the Memorial Tournament when holding a six-shot lead heading into the final round, only to learn he had tested positive as he walked off the 18th green.