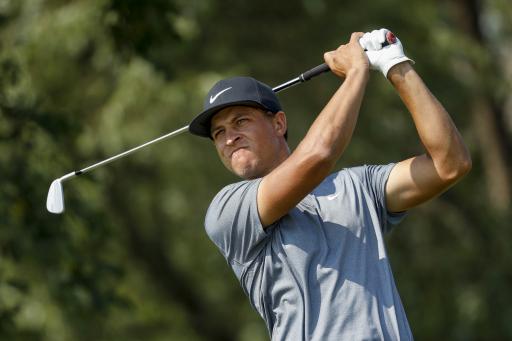 Cameron Champ has won the 3M Open at TPC Twin Cities, securing his third win on the PGA Tour.

Champ has endured some very disappointing form recently, having missed the cut or withdrawing from five of his last seven events, but he secured a two-shot win in Minnesota.

The 26-year-old began the day two shots behind 54-hole leader Cameron Tringale on 10-under-par and he made a fast start with birdies on the 1st hole and the 4th hole.

Unfortunately for Tringale, he endured a bad day on Sunday, carding a 3-over-par 74 which included a triple-bogey at the par-3 13th hole.

CLUTCH.@Cameron__Champ will have 2 feet to win it after a DART at 18! pic.twitter.com/bhd6ihlPqz

One of the main threats to Champ on the final day was Jhonattan Vegas, who made three birdies on the front nine to lead the way on 13-under-par.

The big-hitting Champ, who was feeling unwell on the final day, made birdies at the 8th and 11th holes to take the solo lead on 14-under-par. He then found a crucial birdie on the 16th hole to extend his lead to two shots.

Champ held a two-shot advantage on the 18th tee box but he hooked his drive into trouble on the par-5 hole. He managed to hit his second shot out of the rough but he didn't have a good enough lie to reach the green in three shots.

But under immense pressure, Champ sent his fourth shot sailing towards the green and span it back towards the hole, leaving himself a two-foot putt for par to finish on 15-under-par and his third PGA Tour win.

After another close call at The Open Championship last week, Louis Oosthuizen once again had to settle for final-round disappointment.

The South African carded 5-under-par on Sunday to finish two shots behind the eventual winner, in tied second with Vegas and Charl Schwartzel.