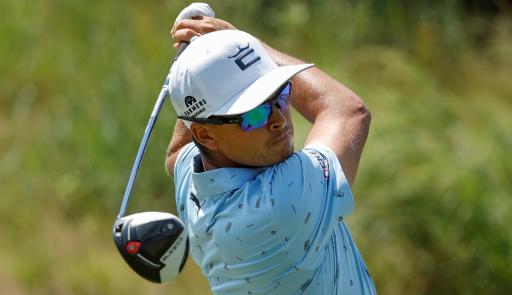 Rickie Fowler surged into contention on the front nine in his third round at the 3M Open, and then stumbled horrifically on the back nine to fall back into the pack.

Fowler, who has not won on the PGA Tour for more than two and half years, played his first 10 holes on day three in 6-under par to move into a share of the lead at the time.

But the wheels would quickly fall off for the five-time winner with back-to-back bogeys at the 13th and 14th, before making a disastrous triple-bogey eight at the par-5 18th.

Fowler found the water with his third shot into the last, and then played his fifth shot over the back of the green. He then failed to get up and down for a tournament-ending eight.

That's his highest score to finish a round on TOUR. pic.twitter.com/hpCsCXvXfe

The American carded a round of 1-under 70 but lies outside the top 30 on 6-under par.

Fowler has posted just one top-10 finish in the past 18 months on the PGA Tour and now finds himself outside the top 100 in the world rankings.

Seeing how Rickie Fowler finished his round today pic.twitter.com/4zTlgSnoRh

Typical @RickieFowler collapsing when it counts the most. Stick to those Quicken Loans commercials bud.

How does one finish like this… Rickie Fowler should sort of be embarrassed. Kind of emulates his career pic.twitter.com/SqQ2L0ZFrZ

Golf is hard. Keep grinding @RickieFowler we see it coming together. #lglg