Social media reacts to Bryson DeChambeau ripping into the bunkers at the Arnold Palmer Invitational... 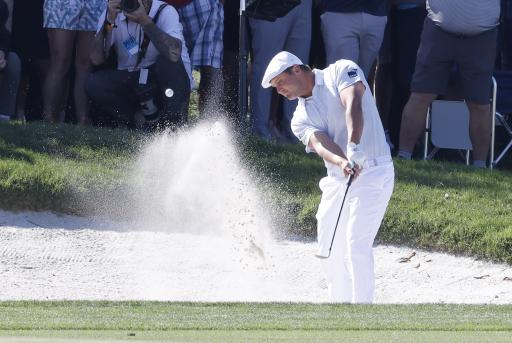 Bryson DeChambeau was overheard saying "the worst bunkers on Tour right there" as he splashed his ball out the greenside bunker on the 11th hole during the final round of the Arnold Palmer Invitational at Bay Hill.

DeChambeau made the comment after thumping his ball out of a plugged lie to 49 feet, before trudging onto the green to incredibly drain the putt for par.

The PGA Tour clearly wasn't best pleased with the comment as they chose to remove it from their social media clip of the bunker shot and eventual holed putt below:

DeChambeau went on to card a round of 71 and see out his eighth PGA Tour title with a one-shot victory over Lee Westwood.

Social media was quick to react to DeChambeau's strange response to the bunkers on a course that carries late great Arnold Palmer's name.

Check out some of the comments on Twitter below:

“Worst bunkers on Tour, right there”.

Sorry Bryson, that’s why people don’t like you pal. Balls plug in sand when they come down from the height you hit it.

Bryson complaining about the bunkers after hitting an absolutely wiped short iron, get real kid. You hit a terrible shot, you deserve the poor lie you got

“Worst bunkers on tour right there” -Bryson.. SIR PLEASE HAVE SOME RESPECT FOR MR PALMER THANK YOU

Did Bryson just insult Arnold Palmer's course by saying that the Bay Hill bunkers are the worst on tour???? #nerd

Can't wait to watch Bryson deal with that comment after the round.