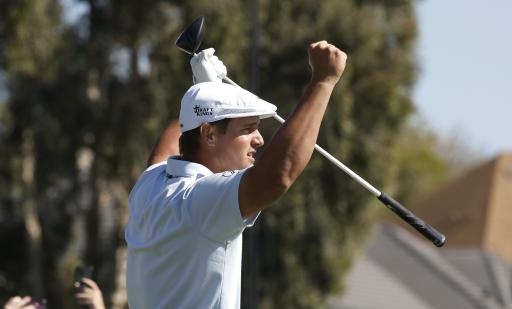 Bryson DeChambeau captured his eighth PGA Tour title with his first-ever victory at the Arnold Palmer Invitational at Bay Hill.

DeChambeau, 27, carded a final-round 71 in testing conditions to finish on 11-under par and one stroke clear of playing partner Lee Westwood.

DeChambeau started the day one shot behind Westwood and that quickly moved to two shots when making a bogey at the first hole.

However, the big-hitting American bounced back with birdies at the par-5 4th and par-5 6th to move into sole possession of the lead, and he would then par into the house from there to seal the win.

DeChambeau emulated his monster drive down the 6th on Saturday by going even further on Sunday with a 377-yard bomb, but it ended up finding the bunker. He would miss the green with his approach shot but played a delightful chip shot to within three feet of the cup for birdie.

Drive: 377 yards.
Distance to the pin: 88 yards.@B_DeChambeau does it again at No. 6.#QuickHits pic.twitter.com/HYSyDvQCMm

Westwood, 47, narrowly failed in his bid to become the oldest winner of a PGA Tour event in 40 years on the PGA Tour but his runner-up finish marked his best around the world since finishing second at the European Tour's season-ending DP World Tour Championship in December.

Corey Conners closed with a 74 to take solo third on 8-under par, while Jordan Spieth continued his impressive run of form with a tie for fourth on 6-under par alongside Richy Werenski and Andrew Putnam.

Rory McIlroy started the round four shots off the pace but had a final day to forget with a 76 and slumped to 3-under par in a tie for 10th.

NEXT PAGE: SOCIAL MEDIA REACTS TO BRYSON DECHAMBEAU RIPPING INTO THE BUNKERS AT BAY HILL IN THE FINAL ROUND