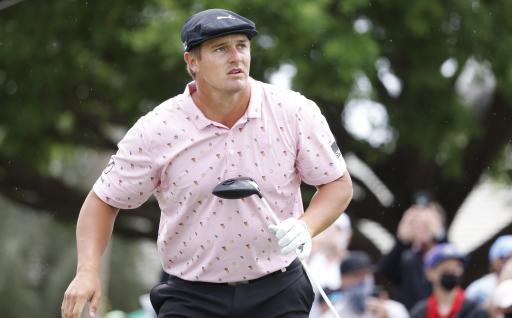 It was like a scene out of Happy Gilmore when Bryson DeChambeau stepped foot on the tee box and looked greenside down the par-5 6th on day three at the Arnold Palmer Invitational at Bay Hill.

DeChambeau might not have quite driven the green at Bay Hill's iconic 555-yard 6th - something he mentioned he would try at the start of the week - but he certainly got very close with a stunning 370-yard rocket that cut the giant dogleg over water and left him just 70 yards into the green.

It was met with a double fist pump to the air and to gasps and cheers of the limited fans watching on from behind the ropes.

Even Jordan Spieth was caught peering through the trees while he was on the 8th hole as he wanted to get a closer look at DeChambeau's drive.

The 370-yard drive marks the longest ever recorded on the 6th hole since 2003.

Unfortunately for DeChambeau, his ball would end up running into the thick rough but it left him only a flick with a wedge that he would send just short of the green, and he would go on to two-putt for a simple birdie.

WATCH DECHAMBEAU'S UNBELIEVABLE DRIVE IN THE VIDEO BELOW:

The longest drive on the 6th hole since 2003.#QuickHits pic.twitter.com/zkL2jlU8S3

Some 10 minutes later, Rory McIlroy stepped onto the same tee box and emulated DeChambeau's effort by driving his ball on the same line to 360 yards into the rough.

Just last month, DeChambeau told Golf.com that should he play in this year's Arnold Palmer Invitational, then the par-5 6th is a hole where he will show just how useful his new-found power can be at times.

"If I play this year I will definitely do it. Number six at Bay Hill is one of those I've been eyeing. I think I can do some pretty cool things on it."

NEXT PAGE: JORDAN SPIETH MAKES A HOLE-IN-ONE ON DAY THREE!