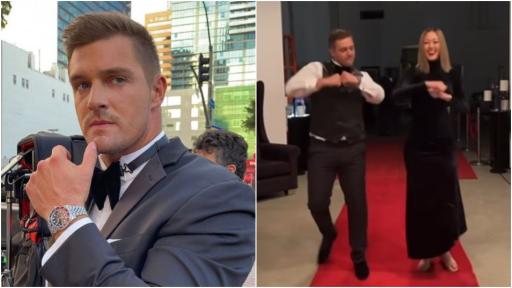 Bryson DeChambeau has still resisted the urge to get back on the PGA Tour this season, and this week he has continued his mini off-season by dressing up as James Bond for a new commercial.

While the specific ad is unknown at this stage, it was a red carpet event and DeChambeau posted a snap of him posing in his tuxedo with the caption: "The name's Bryson."

LPGA Tour star Michelle Wie was also on the scene, and she posted a little video of her dancing with DeChambeau:

One golf fan wrote: "Why is your tie not on properly? This is peak Bryson," to which DeChambeau responded: "part of the commercial gig."

"That watch," wrote another fan.

"Such an idol," wrote another.

DeChambeau will be teeing it up against Brooks Koepka in a 12-hole Match on November 26, the day after Thanksgiving at The Wynn Golf Club in Las Vegas.

DeChambeau is then going to tee it up in Tiger Woods' annual Hero Wrold Challenge event a week later out in Albany, Bahamas - a venue where the big-hitting American has been unleashing bombs on the practice range in recent weeks.