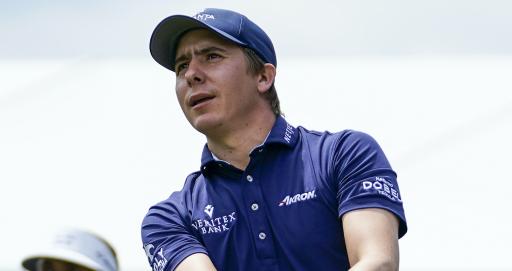 Carlos Ortiz has disappointingly withdrawn from the Hewlett Packard Enterprise Houston Open with a shoulder injury, leaving him unable to defend his title from 2020.

Ortiz had to withdraw from the ZOZO Championship in Japan because of a shoulder injury and it is this recurring problem that has forced him to withdraw this week in Texas.

The Mexican's win at last years' renewal was his maiden PGA Tour victory and he impressively fought off the challenges of major champions Dustin Johnson and Hideki Matsuyama.

"Unfortunately, I've been battling a left shoulder injury since Japan and after meeting with my doctors this morning, it was recommended that I take the rest of the season off to recover," Ortiz said.

Rory Sabbatini has a new tattoo & it has a spelling error...
PGA Tour: Why players are wearing purple ribbons at Sony Open

RELATED: PGA TOUR: HOW TO WATCH THE HOUSTON OPEN AND ROUND 1 AND ROUND 2 TEE TIMES

Feeling the love at home.

For the third straight year, @CarlosOrtizGolf wins lowest Mexican in the field with a solo second finish. pic.twitter.com/nwU8b87SdT

"This is incredibly disappointing to me as I was looking forward to defending my first PGA Tour title in Texas, my second home. I’m honoured to be a champion of this event and I look forward to returning next year."

It is unclear as to when the World No. 49 will return to the golf course, but we hope that his shoulder injury does not keep him out of action for too long.

At his home tournament at the World Wide Technology Championship in Mayakoba last week, Ortiz finished second to Viktor Hovland in front of an adoring Mexican crowd.

The 30-year-old made five birdies in his final seven holes in the last round to shoot a 66, finishing ahead of Justin Thomas and Scottie Scheffler.

This was Ortiz's best finish on the PGA Tour since his win in Houston, so it is a shame to see his shoulder injury disrupting his great form.

NEXT PAGE: THE DP WORLD TOUR SIGNALS A DEPRESSING END TO THE EUROPEAN TOUR AND ITS VALUES