The 28-year-old posted his achievement on his Instagram stories and told fans how he was learning to maintain the speed. 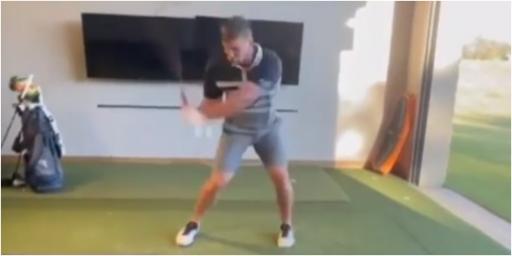 Bryson DeChambeau may not have played an event on the PGA Tour this season but his Instagram stories suggest he's ready.

He posted a video on his social media showing him ripping driver and achieving a ball speed of 215mph for the very first time.

In September, DeChambeau helped the United States to a 19-9 victory over the Europeans in the Ryder Cup.

He hugged Brooks Koepka and partied for one night before hopping on a plane to go and compete in long drive world championships.

To the surprise of absolutely nobody, DeChambeau managed to finish sixth at the Pro Long Driver's Association World Championship.

Before the Ryder Cup he told how long drive training was giving him blisters and posted videos of his exploits.

Drenched in sweat and almost fainting after some high intensity sessions, DeChambeau left nothing in the tank.

Speaking after the world championships in Mesquite, Nevada, DeChambeau told of how he has a new target in mind.

He's trying to achieve an average ball speed of at least 200mph this season on the PGA Tour.

And of course, he wants to add some more titles and perhaps even another major championship to his resume.

DeChambeau's relentless pursuit for speed and power has even inspired some of the elder statesmen from the PGA Tour.

Just this week Matt Kuchar told how he tried (unsuccessfully) to try and chase more speed.

"I spent some of those months seeing if I could do it," Kuchar told GolfDigest.

"Looking back, it probably was the thing where if I had to point a finger at one thing, that's where I went down the wrong path."