Harris English leads after round two in Hawaii in a tightly-packed leaderboard, with DeChambeau four off the pace. 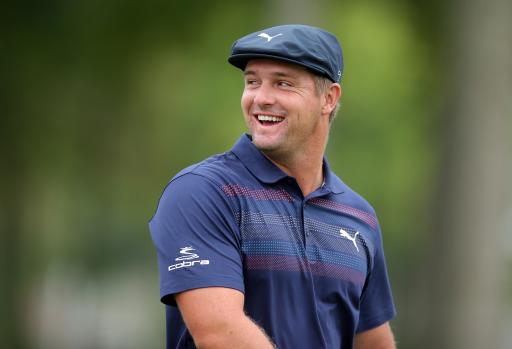 Bryson DeChambeau's power was on show during the second round of the Sentry Tournament of Champions on Friday, after he drove the green at the 431-yard par-4 12th hole, before two-putting for birdie.

The US Open champion's round started with four consecutive pars, before he made his first birdie of the day at the par-5 5th and added further gains at 8 and 9.

Two pars followed as DeChambeau started his back nine and on the 12th tee he showed exactly what he's been training for, when he ripped his drive all the way to the green, 431 yards away.

WATCH DECHAMBEAU DRIVE THE GREEN AT THE 12TH BELOW:

DeChambeau shot a 6-under par round of 67 on Friday, although the 12th hole was the only par-4 he birdied all day, something he will be disappointed about.

The 27-year-old has been working on increasing his distance and speed, with World Long Drive champion Kyle Berkshire helping DeChambeau in his quest for an average ball speed of between 205 - 210mph on the PGA Tour.

After his opening round on Thursday, DeChambeau revealed that his speed training is so intense at times that it's had him "see a tunnel" and come "very close to blacking out".

RELATED: Bryson DeChambeau reveals he almost "BLACKED OUT" during his speed training

Harris English, who shared the overnight lead with Justin Thomas heading into Friday's second round, now holds a solo two-shot lead at 14-under par.

World No.3 Thomas sits in a tie for second, with a fairly disappointing 4-under par second round in what was an extremely low day of scoring. He shares second place with Ryan Palmer, Daniel Berger and Collin Morikawa.

Dustin Johnson put himself back in contention with the joint lowest round of the day, shooting 8-under par to climb to T10 in the leaderboard, four shots off the lead.