PGA Tour deem Thomas' actions as "unacceptable", and the American is expected to receive a hefty fine... 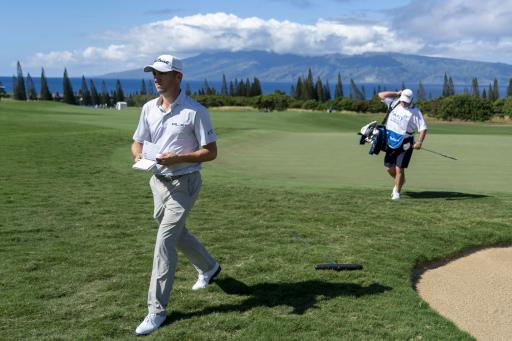 Justin Thomas has apologised after being caught using a homophobic slur on the 4th hole during round three of the Tournament of Champions.

Thomas, the World No.3, missed a five-foot putt for par on the 4th hole as he then uttered the homophobic slur while tapping his ball in for bogey. WATCH the incident here:

Big fan, not a great look.

Are we gonna apologize for the language here @JustinThomas34 @PGATOUR ? pic.twitter.com/QvIYdOv7F9

WATCH: JON RAHM GETS VERY ANGRY ON THE GREEN AT TOURNAMENT OF CHAMPIONS

Thomas, 27, went on to sign for a 5-under 68 to move to 17-under par for the tournament after 54 holes - four strokes behind joint 54-hole leaders Harris English and Ryan Palmer.

"There's just no excuse - I need to do better. I deeply apologise."

"There's just no excuse," said Thomas after his round.

"There's absolutely no reason for me to say anything like that. It's terrible. It's not the kind of person that I am."

"I need to do better. I deeply apologise to anyone and everybody who I offended and I'll be better because of it."

The PGA Tour said: "As he expressed after his round, we agree that Justin's comment was unacceptable."

Thomas is now expected to receive a hefty fine for his actions.

RELATED: Justin Thomas says golf wasn't on his mind during the final round

Palmer carded a stunning 9-under 64 to vault to the top of the leaderboard alongside in-form compatriot English, who also performed admirably with a 7-under 66.

Collin Morikawa lies a further stroke behind on 20-under par following a third-round 65, with Daniel Berger back in fourth on 18-under par.

Thomas lies in a tie for fifth on 17-under par alongside Sungjae Im.

Billy Horschel, Patrick Cantlay and Joaquin Niemann are five strokes off the pace on 16-under par.

WIN PUMA CAPS FROM THE TOURNAMENT OF CHAMPIONS HERE: