Bryson DeChambeau confronts golf fan after his "Brooksie" comment at the BMW Championship on the PGA Tour. 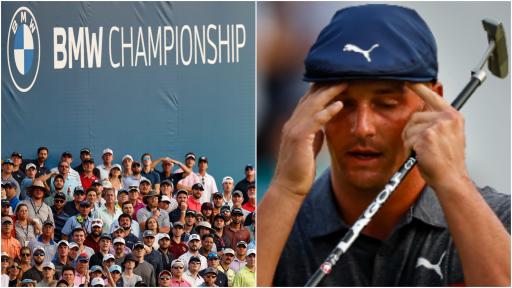 Bryson DeChambeau reportedly "spun around in a fit of rage" and told a golf fan to "get the f*** out" following a comment that was made as he trudged off the back of the 18th green in the final round of the BMW Championship on Sunday.

DeChambeau agonisingly saw his birdie attempt slip past the hole from inside of 10 feet on the sixth extra hole as his US compatriot Patrick Cantlay clinched his fifth PGA Tour title to move to the top of the FedEx Cup standings.

RELATED: HOW THE TOP 30 LINE UP AT THE TOUR CHAMPIONSHIP

According to ESPN's Kevin Van Valkenburg, as DeChambeau walked off the back of the 18th green, he overheard a fan yelling "Nice job, Brooksie!" (in reference to DeChambeau's ongoing spat with Brooks Koepka).

DeChambeau, understandably frustrated at failing to win the tournament, reportedly "spun around in a fit of rage" and began walking towards the golf fan who made the comment.

"You know what? Get the f*** out!" DeChambeau shouted back at the fan, according to Van Valkenburg.

DeChambeau is then said to have motioned for a police officer to confront the fan, before he continued his climb up the hill to the clubhouse.

To DeChambeau's credit, he did hand his iconic cap to an ecstatic young fan.

DeChambeau, who is bidding to win the FedEx Cup for the first time in his career, will start this week's season finale at the Tour Championship on 7-under par and three shots behind Cantlay.

NOW WATCH: BRYSON DECHAMBEAU CALLS OUT PATRICK CANTLAY FOR WALKING ON HIS SHOT