Bryson DeChambeau CALLS OUT Patrick Cantlay for WALKING on his shot!

Patrick Cantlay says "no big deal" as Bryson DeChambeau calls him out at the BMW Championship on the PGA Tour. 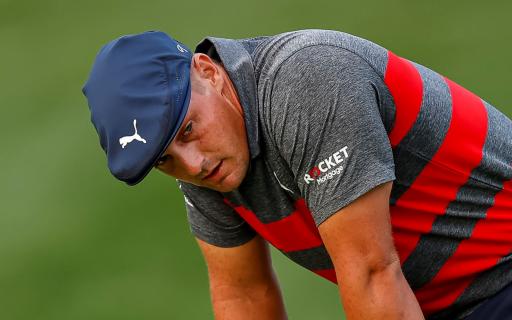 Bryson DeChambeau was overheard calling out Patrick Cantlay for walking while he was about to play his approach shot on the 14th hole at the BMW Championship on Sunday.

DeChambeau had been one shot ahead of his compatriot at the time on 27-under par, with Cantlay already on the green some 22 feet away.

"And I took that personally." pic.twitter.com/Y2D6LHHX1Z

The big-hitting American stepped in to play his second shot with a wedge from 130 yards to the par-4 14th but then backed off and said: "Patrick, can you stop walking."

DeChambeau apparently saw Cantlay walking in the corner of his eye, causing him to step back off the shot.

He then poorly sent his ball into some 40 feet and two-putted for par.

Cantlay then buried his birdie putt from 22 feet to pull level.

"I’m surprised he called Patrick out like that," said Paul Azinger in the commentary box.

"Really, that can break your own concentration when you call a guy out like that."

DeChambeau then moved one shot ahead with a birdie at the 16th, and then both players bogeyed the 17th despite Cantlay finding the water with his tee shot.

Cantlay then drained a 20 footer at the last to force a playoff with DeChambeau, who could not convert his birdie putt on the same line from nearly half the distance, and Cantlay would go on to win with a birdie at the sixth extra hole.

The win moves Cantlay straight to the No.1 spot in the FedEx Cup, where he will start at 10-under par at the Tour Championship in a bid to win the FedEx Cup for the first time in his career.

DeChambeau refused to speak to the media yet again, something he has now done for the best part of two months.

Cantlay was asked about the incident at the 14th, to which he shrugged it off as "no big deal."

"He just wanted me to stop walking," said Cantlay.

"We had just been told by the rules officials to kind of speed up, and I'm not always the fastest walker, so I was trying to get ahead and do my part.

"No big deal. That stuff kind of happens every once in a while out here."

NEXT PAGE: HOW THE TOP 30 PLAYERS WILL LINE UP FOR THE FEDEX CUP FINALE AT THE TOUR CHAMPIONSHIP