K.H Lee needed a par on the 72nd hole at the BMW Championship to qualify for the Tour Championship, but he failed at the final hurdle. 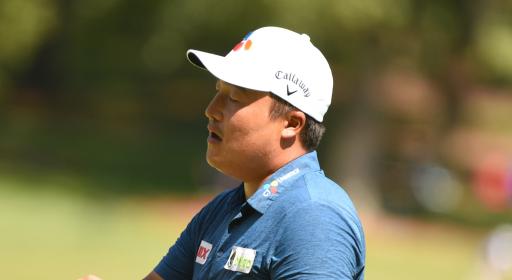 As Patrick Cantlay and Bryson DeChambeau were battling it out, trading birdie after birdie at the BMW Championship, there were many players trying to fight their way into the top 30 in the FedEx Cup standings.

The 70-man field at Caves Valley Golf Club was more than halved into 30 players who qualified for the Tour Championship, but unfortunately, K.H Lee will not be playing at East Lake next week.

Entering the back nine on Sunday, Lee was 14-under-par for the tournament and in 33rd place in the FedEx Cup standings, so he needed some inspiration.

The winner of the AT&T Byron Nelson made three consecutive birdies on holes 13, 14 and 15 and he found another birdie at the 17th hole.

RELATED: BRYSON DECHAMBEAU CALLS OUT PATRICK CANTLAY FOR WALKING ON HIS SHOT!

Lee was 18-under-par and standing in the middle of the 18th fairway after his tee shot, he was sitting pretty in 29th place in the FedEx Cup standings.

Qualifying for the Tour Championship is a golden ticket, not just because you can win the massive prize of $15 million, but because the minimum amount of money a player can win at East Lake is $395,000.

Under immense pressure, Lee pushed his approach right of the green and near the stream that runs down the hole. His ball remained dry as it bounced by the stand, where he got a free drop.

This shot proved to be the one that cost him his place at the Tour Championship. He went on to make a bogey and dropped down to 32nd place in the FedEx Cup standings.

Although it was an agonising end to his season, the South Korean can always look back on it as the year when he won his maiden PGA Tour title.

NEXT PAGE: BRYSON DECHAMBEAU CALLS OUT PATRICK CANTLAY FOR WALKING ON HIS SHOT!