Hovland reported the incident himself to the PGA Tour but had already signed his scorecard. 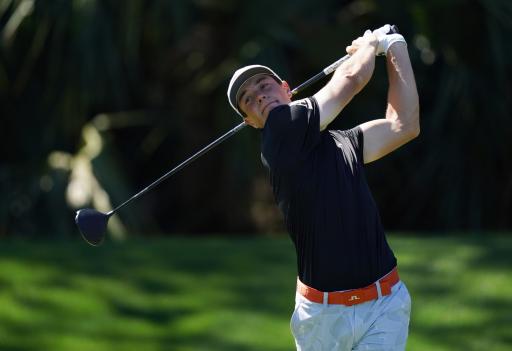 Viktor Hovland was given a two-stroke penalty following his opening round at TPC Sawgrass and despite signing for an incorrect scorecard, the Norwegian escaped disqualification after he self-reported the incident.

The rising superstar shot a solid 2-under par round on Thursday to open his account at The Players Championship, but due to an incident that occurred on the 15th hole, he was given a two-stroke penalty, meaning he now goes into the second round level par.

Hovland marked his ball on the green and due to being in the line of one of his playing partners, Justin Thomas, he moved his marker one putter head to the side.

The 23-year-old made a mistake without realising, as instead of moving his marker back to the original spot, he moved it one more putter head to the side.

"Viktor Hovland was assessed a two-stroke penalty under Rule 14.7 for playing a ball from the wrong place. Hovland marked his ball on the 15th green, moved it one putter-head length for another player, and then moved it again in the same direction rather than replacing it," read a statement from the PGA Tour.

Hovland signed his scorecard which had him down for a par at the 15th hole and had he known about his mistake and still signed, he'd have been disqualified, but Rule 3.3b3 states a player can be penalised if they unknowingly violate a rule.

It was also revealed that it was Hovland himself who reported the incident to the PGA Tour, after he heard about it through someone in Norway.

“I think he heard about it from someone in his home country,” rules official Gary Young told the PGA Tour . “I think it might have shown up on the feed in Norway. He and his caddie reached out to our committee and asked if we had any video of it, because he had no recollection of doing it.

“He had left the property. I sent him a clip of the video, and he’s very comfortable with the result, that he’s getting the penalty. He understands the rule. He didn’t know he did it.”