Bryson DeChambeau hit the shortest drive of his career during his match against Si Woo Kim. 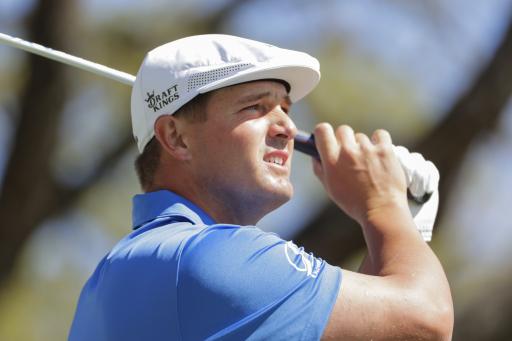 Bryson DeChambeau was happy to laugh off his nightmare drive at the 10th hole at Austin Country Club, after he beat Si Woo Kim to keep his WGC-Dell Technologies Match Play hopes alive.

At the time of the incident, there was no video footage of what happened at the 395-yard par-4 10th on Thursday, but the image below began circulating on social media and golf fans were left a little confused as to what had happened.

DeChambeau's drive had travelled all but 46-yards, after he "heel-pulled" the shot in an attempt to hit the green, with his ball then striking a tree in front of him and ending up amongst the crown by the practice green.

A short while later and a spectator who had captured the moment on camera posted the video on social media.

Bryson DeChambeau on his drive at No. 10 Thursday:

"Hey, look, I was trying to drive the green ..." pic.twitter.com/O9RJIjC5bg

The US Open champion went on to lose the hole, which was the second of three holes lost in a row, but DeChambeau clawed his way back by winning the 14th, 15th and 17th to claim a 2&1 victory over Kim.

Following his win, DeChambeau was able to shed some light as to what exactly happened at the 10th tee.

"I heel-pulled it lower than I wanted," said DeChambeau.

"It came off low off the face and came out low. I could have easily cleared the trees up and over like I wanted to, but I hit it on the wrong part of the face and consequently hit the tree limb. Hey, look, I was trying to drive the green, whether it was the practice green or the 10th green. I got it close!"

DeChambeau faces Tommy Fleetwood in a crunch match on Friday, where either player can still make it to the knockout rounds and it will make an interesting specticle for golf fans, with the possibilty of the two facing each other at the Ryder Cup in September.