After his defeat to Ian Poulter, Rory McIlroy hit 11 bags of balls in an extensive practice session at the WGC-Dell Technologies Match Play. 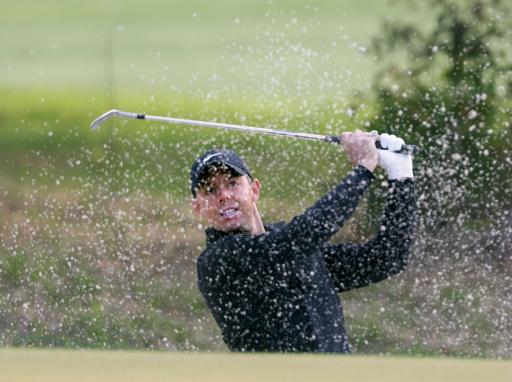 Rory McIlroy was in high spirits after he put together a fantastic round of golf at Austin Country Club that saw him claim a dominating 4&3 victory over Lanto Griffin on Thursday.

The Northern Irishman was thrashed by Ian Poulter in his opening match of the WGC Match Play and following his loss, McIlroy went through 11 bags of balls on the range in an extensive practice session.

The hard work seemed to pay off as McIlroy bounced back with a victory over American Griffin to give himself an outside chance of qualifying for the knockout stages.

For McIlroy to make it to the next round, he will need to defeat Cameron Smith when the two go head-to-head later today, while he will also be relying on Poulter losing to Griffin.

"That was big," said McIlroy after Thursday's match. "Obviously winning the match today keeps me in the tournament and gives me hope for tomorrow. It looks like Lanto is going to have to do me a favour and beat Poults.

"I hit a couple of destructive shots yesterday, but overall both of us played well, and I didn't feel the scoreline matched up with how I felt like I played. And then the same thing today. I played solid. Lanto didn't have his best stuff, but I played solid and kept it in play and holed some good putts when it mattered."

It was recently revealed that McIlroy had hired a new golf coach in Pete Cowen, as the former World No.1 looks to regain his form after an inconsistent year.

Cowen said himself that it would be no overnight fix, but McIlroy is positive that the hard work and dedication he is willing to put in will benefit his game in the long run.

"As everyone knows who's played this game, it's a very difficult game at times, and I feel like it's testing me a little more than it has done in the last few years," he added. "I feel the only way to get through it is to put your head down and work on the right things and sort of trust the process of maybe put in the hard work.

"I doubt that one session is going to pay off that much, but I think it's just a process, and it's something I'm going to have to continue to do each and every day and put my faith and my trust in the fact that what I feel like I'm trying to do is the right thing and go forward."