Bryson DeChambeau: "My 4-utility iron CRACKED at The Players Championship"

DeChambeau says he cracked his utility iron when playing his third shot to the par-4 4th hole in the final round of The Players Championship... 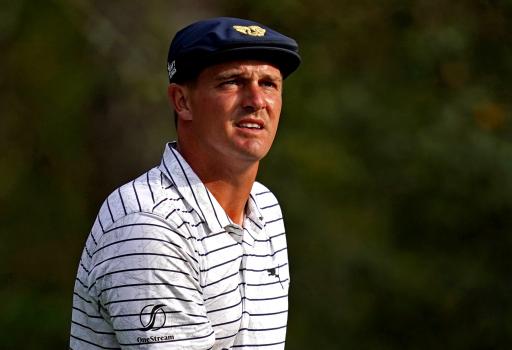 Bryson DeChambeau has revealed he cracked his 4-utility iron in the final round of The Players Championship.

DeChambeau confirmed the crack happened just moments after incredibly topping a drive 100 yards into the water on the par-4 4th hole.

The American took his drop onto the tee box, and then sent his next shot with his utility iron way right of the green en route to a double-bogey six. It was on that third shot where the crack happened, according to DeChambeau.

"My 4-utility iron cracked," said DeChambeau, who went on to finish two shots behind eventual winner Justin Thomas in a tie for third.

DeChambeau, who is sponsored by Cobra Golf, uses a KING Utility prototype, which is a hollow construction like most other utility clubs seen on the market. They are designed in a way to provide face flex, just like your driver.

But when you swing as hard and fast as DeChambeau, who now has a clubhead speed bordering the 150mph mark, it would appear that no club face is safe in the hands of the PGA Tour's biggest hitter.

We recently dived into DeChambeau's bag after he won the Arnold Palmer Invitational on the PGA Tour to check out the clubs he is using this season. Check out our video below:

WATCH: BRYSON TOPS DRIVE INTO WATER ON THE 4TH HOLE AT PLAYERS