Bryson DeChambeau or Rory McIlroy - who has the best driver swing?

Does Bryson DeChambeau have the best driver swing in the world? Golf fans debate. 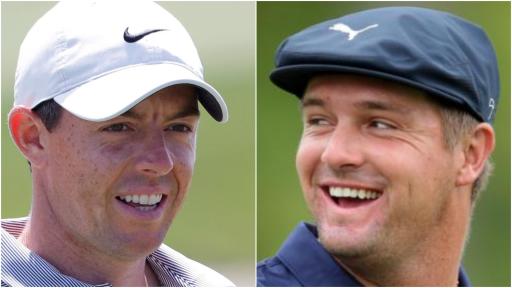 Golf fans have been debating GolfMagic's latest Instagram Reel Question today as to whether or not Bryson DeChambeau has the best driver swing on the PGA Tour?

It's fair to say our followers appear somewhat divided with many Bryson fans in favour of such view, and others favouring the likes of Rory McIlroy and Adam Scott.

A couple have even voted for Tiger Woods and Tommy Fleetwood, while one even joked (we assume) Jim Furyk.

With an average ball speed of 200 mph, DeChambeau is a clear leader in the driving distance charts right now, and likely will be for some time given his dedication to increaasing his power and speed each season on the PGA Tour.

DeChambeau is in action at Torrey Pines this week for the Farmers Insurance Open so will no doubt be sending plenty more rockets into the San Diego sky.

More often than not, DeChambeau, who finished in the top eight at the World Long Drive Championship in 2021, is also pretty accurate off the tee.

In our view, McIlroy's driver swing is poetry in motion and is a joy to watch, but what DeChambeau is doing right now is as impressive as we have ever seen from a driving perspective on the PGA Tour.

We would have to also throw Scott into the mix, as too Dustin Johnson, who we have always rated as a very good driver of the ball.

Not everyone sees it that way though.

"DeChambino all the way, he produces the best results" said another.

"I might have to agree with Bryson to be fair," wrote one golfer.

"McIlroy or Scott all day," said another.

"Anyone heard of Rory McIlroy?" questioned one fan.

Another commented: "Rory is the best by far. He is not only power but he can hit the shot he wants."

"It will always be Adam Scott for me. Pure as it gets," said another.

One golfer commented: "Nah, Jim Furyk for me."

Who would you say has the best driver in the world? Head over to the GolfMagic Instagram page now and comment with your favourite driver of the ball.

You also still have time to enter two fantastic competitions that we have on our Instagram page right now.

To give yourself an even greater chance, make sure you also enter via our Facebook and Twitter pages, too.