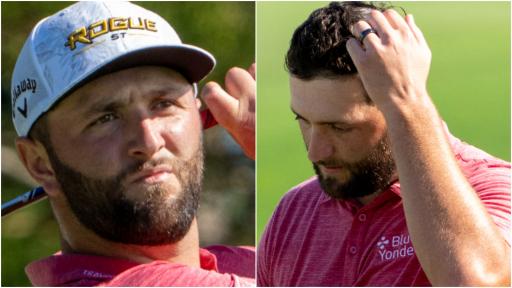 Jon Rahm has refused to back down on his controversial comments that were captured on camera by a fan as he trudged off a green at The American Express on the PGA Tour last week.

Rahm endured a frustrating week from tee to green by his own high standards as he recorded a tie for 14th.

Rahm isn’t too happy with the easy conditions at the AmEx pic.twitter.com/mkj0gOqZgo

"What a piece of s*** set-up f***ing putting contest week," Rahm was heard saying as he stormed off a green during the final round.

Despite not knowing a fan was recording him as he walked past them on Sunday, the World No.1 was quizzed about the viral video ahead of this week's Farmers Insurance Open that starts on Wednesday.

Rahm admitted the way he was striking the ball during The American Express was not even worthy of a top-15 finish.

"My reaction? I mean, the video's pretty self-explanatory," Rahm told the reporters at Torrey Pines.

"I mean, we’re the PGA Tour, we’re the best golfers on the planet and we’re playing a golf course where missing the fairway means absolutely nothing.

RELATED: GOLF JOURNALIST HAS AN ABSOLUTE SHOCKER WITH JON RAHM AT THE AMERICAN EXPRESS

As for being recorded, Rahm said he would have toned down his language had he known he was live, but he was just letting off steam.

Rahm has been known as one of the hot-heads on the PGA Tour down the years but since becoming a father recently had appeared to be mellowing somewhat. Whatever happened to that goldfish?

"I mean, if I knew somebody was recording, I wouldn’t say it the way I did, but I was just thinking out loud and letting some frustration out because that’s what I felt, right?" continued Rahm.

"No matter where you hit it, you’re going to be able to hit it on the green and it becomes a putting contest, who can make the putts. That’s about it; there’s no premium for anything else."

"I can tell you right now with the way I struck the ball last week and the way I putted, if it was in, let’s say, major championship conditions, I probably wouldn’t have made the cut let alone finished 14th, or I shouldn’t have, I believe.

"I just think it was a bit too easy for the best players in the world. That’s just my opinion."

Rahm admits he prefers a stricter test when it comes to ball striking on the biggest stage of the PGA Tour, not a course where you can smash it anywhere and still have a shot into the green.

Torrey Pines, where Rahm has won twice in the past including his maiden 2021 US Open victory, should offer him exactly that as he looks to get back on track and record his first win since that very win back in June.

He added: "A lot of it depends on the golf course, but I would like a setup that would challenge us in every aspect of the game.

"I like fairways to be narrow, I like the rough to be up so you can’t just miss the fairway and go for the green with whatever you want. I would like the greens to be firm. They don’t need to be ridiculously firm, but firm. And I’d like greens at the right speed."

NEXT PAGE: COLLIN MORIKAWA HAD "NO CLUE" WHERE THE BALL WAS GOING IN ABU DHABI