Ben An had some issues with scoring on the Korn Ferry Tour and it appears he wasn't the only one. 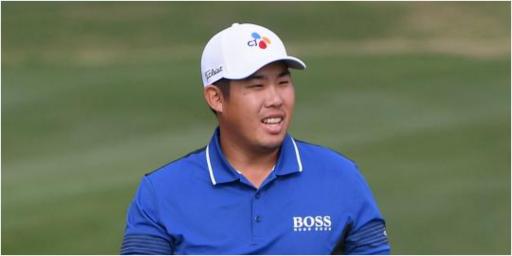 Byeong Hun An was involved in an hilarious exchange after there was reportedly mixup on the Korn Ferry Tour.

That mixup reportedly related to the scoring during the second round at The Bahamas Great Abaco Classic.

One user pointed out mid-way through the second round in the Bahamas that watching the score tracker was hilarious.

It was reportedly changing the scores every few minutes. What exactly was going on here?

Byeong An, better known as Ben An, picked up on the post and detailed some of his issues that he was having.

Apparently, his wife told the scorer that he had got a "three". His caddy confirmed this but then he ended up with a five.

This reportedly was happening all over the course. "So yea i would wait until the finish," An wrote.

He confirmed later that his second round was in fact a 66.

More: Ben An mocks himself after making an 11 at famous 17th at TPC Sawgrass

An has been involved in some funny moments on the golf course. At TPC Sawgrass, he famously made an 11.

He saw the funny side of it, though, Tag a buddy who would do this, the Golf Channel wrote on Twitter above the video.

An decided to tag himself for a laugh and went on to say that his tee shot was "f***ing horrendous".

Last year he hosted a pretty amusing Q&A as the social media lights went out.

He did that with a caddie who "knows nothing about golf".