Bryson DeChambeau has admitted that he is 'different,' but he has vowed to persevere despite the attention he receives from the media and golf fans. 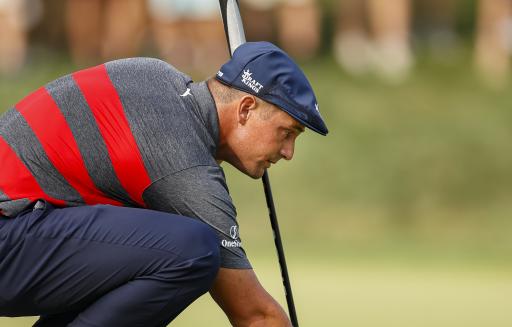 Bryson DeChambeau admitted that he has taken heat "his entire life" when fielding questions regarding his relationship with the media and golf fans.

It was another turbulent week for DeChambeau at the BMW Championship. He lost to Patrick Cantlay in a memorable six-hole playoff at Caves Valley Golf Club, but he made headlines for reportedly swearing at a spectator and asking Cantlay to stop walking while he took his shot.

This type of incident has been the story of DeChambeau's season, despite winning his first major title at the US Open in 2020 and the Arnold Palmer Invitational in March.

He has also had to field questions throughout 2021 about his feud with Brooks Koepka, which is another issue away from his golf game that has been dominant this season.

Speaking to Todd Lewis at Golf Channel, the 27-year-old said that he will endeavour to keep moving forward while receiving 'heat' for his actions on the tour.

"Look, I can take heat, I have taken heat my whole life and it's because I am a little different and I understand that," said DeChambeau.

"I appreciate that too, whether it is Elon Musk or Jeff Bezos or whoever it is, there is always going to be heat and I recognise that and I respect that.

"I would say on my end, golf was always a game where integrity and honesty are very, very important to the game. I personally think that as time has gone on, I think it's a bigger issue at hand."

Unfortunately for the big-hitting American, he couldn't secure his ninth PGA Tour title at the BMW Championship, despite applying constant pressure to Cantlay in the playoff.

Nonetheless, DeChambeau will start on 7-under-par at the Tour Championship today in third position in the FedEx Cup standings, three shots behind Cantlay and one shot behind Tony Finau.

He is in great shape to win his first FedEx Cup and the $15 million prize money, and overcoming pressure to play great golf is what he intends to do at East Lake this week.

"Has it distracted me? It's another variable that I have to take account for, but guess what, I am going to keep trying my best to treat everyone the way they want to be treated and absolutely give my heart out on the playing field," DeChambeau added.

"Going out and executing the best golf shots that I possibly can, bombing drives and hitting amazing putts that go in the hole every once in a while and hitting amazing irons shots under the gun is something I relish and appreciate every single week."