Patrick Cantlay, not usually one to open up, gave a full and detailed explanation as to what he thinks is happening 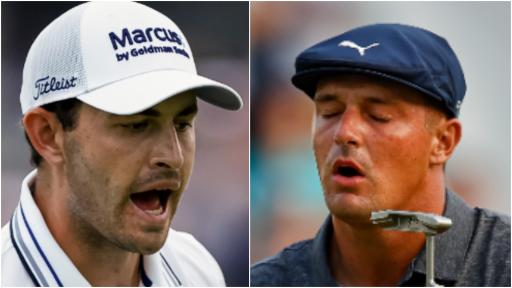 FedExCup points leader Patrick Cantlay is not usually one to open up.

He cuts a stoic figure most of the time, offering little emotion but a killer instinct on the golf course.

It has earned him the nickname 'Patty Ice' and he lived up to it when he saw off Bryson DeChambeau in a six-hole playoff epic last week.

Cantlay, who was qualified automatically for Steve Stricker's Team USA Ryder Cup side with the win, had some interesting thoughts on Bryson.

They come in the wake of the PGA Tour's announcement they plan to crackdown on hecklers shouting 'Brooksy' towards DeChambeau.

He has admitted in the past he usually is quiet because he likes to be well-read about a subject before offering an opinion.

Cantlay pointed to Bryson's critics as potentially being a much larger problem within the sport.

He referenced the Player Impact Program, with the 10 most influential players on Tour off the course getting part of a $40 million prize fund at the end of the season.

The most valuable player off the course is set to get $8 million, but the list is not set to be made public.

Thank you to all the fans who stuck with me through that playoff! I had a lot of fun battling down the stretch and going into extra holes. This win means a lot having earned a spot for myself on the @RyderCupUSA team this year pic.twitter.com/uG0IkHZ5W7

Here is his response in full:

"I think it's a tough situation. I think, naturally, of course there is some sympathy because you don't want to see anybody have a bunch of people be against you or even be heckled. I think anybody that watches sports and sees someone being heckled, they don't like that inherently because if you imagine yourself as that person, it wouldn't feel good.

"I think, unfortunately, it might be a symptom of a larger problem, which is social-media driven and which is potentially Player Impact Program derived. I think when you have people that go for attention-seeking maneuvers, you leave yourself potentially open to having the wrong type of attention, and I think maybe that's where we're at it, and it may be a symptom of going for too much attention.

"But it can be awesome, too, because if you succeed and you act perfect all the time and you do the perfect things all the time, and then you also go for the right attention-seeking moves, you get like double bonus points because everyone loves you and you're on the perfect side of it. I think it's just a very live-by-the-sword, die-by-the-sword type of deal. And when you leave it to a jury, you don't know what's going to happen. So it's hard to get all 12 people on a jury on your side.

"And if you're playing professional golf on the stage that you're playing on and 98 percent of the people are pulling for you and there are 10,000 people on the green, I don't know, what does that leave, 20 people that don't like you, even if 98 percent of the people like you? And if those 20 people have had enough to drink or feel emboldened enough to say something because they want to impress the girl they're standing next to, then, yeah, like, you're in trouble. Like, people are going to say bad things.

"Golf, unfortunately, doesn't and probably shouldn't tolerate that. I think there's a respect level in golf and there's intimacy that the fans can get so, so close to you, and you're also all by yourself, and you don't have the armor of putting on Yankee pinstripes, and you don't have the armor of having, knowing that if you're on the Yankees and people hate you and you're playing in Boston, you can tolerate it for three hours in right field. But you only tolerate it because you know next week or on Friday you're going to show up and you're going to be in Yankee Stadium and no matter what you do, even if you fall on your face, you're going to have the pinstripe armor on and people are going to love you.

"So golf is different in that respect, that if you only have two percent of the people that are very against you because you're polarizing and because you're attention-seeking, then you're kind of dead because those people are going to be loud, and they're going to want to say something to get under your skin."

He continued: "And I think golf shouldn't let that happen. I think the Masters is a great example of a place that doesn't let that happen, and it's the greatest place to watch and play professional golf because of the atmosphere they create. I think if you look at the history of the game and you look at the respect that underlies the entirety of the history of the game, we shouldn't tolerate it, and we shouldn't celebrate that. We should celebrate the fan that is respectful and pulls for their side.

"So it's a tough situation. It's a tough topic, but that would be my take on it and I'm sure it's not perfect, but after thinking about it a little bit, it's the best I can come up with."