Bryson DeChambeau posted an ominous tweet two days ago and now we know what he was referring to. 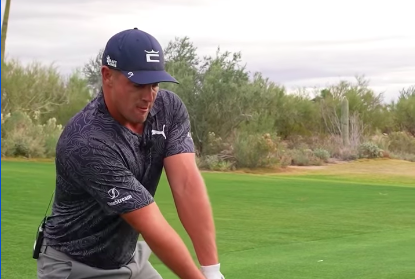 Bryson DeChambeau achieved a staggering new ball speed record with his driver in his latest post on Instagram.

In the footage, DeChambeau limbers up in the style of a Long Drive competitor with energy and concentration and put his hardest swing on the golf ball.

He shouted after the ball before a member of his team revealed that he had achieved a ball speed of 221.5 mph. His ultimate target is to reach 225 mph.

The former US Open champion was ecstatic at his incredible new benchmark and there were many people who stood around him to catch the footage as well.

RELATED: JUSTIN THOMAS WAS ASKED HOW CONFIDENT HE IS OF TIGER WOODS PLAYING THE MASTERS

The 28-year-old's focus on his long game is abundantly clear and Long Drive is a new passion of his. In September, he came seventh in the Professional Long Drivers Association World Championship.

After DeChambeau posted the video on Instagram, he left a comment on it which said: "How’s my putting?" It appears that DeChambeau is jokingly aware of his fixation on the driver.

Two weeks ago, the eight-time PGA Tour winner posted a video on his YouTube channel in which he made a discovery about his swing that he was genuinely shocked by.

This development in his swing trajectory could have been the key to him achieving his record ball speed and on the road to 225 mph.

DeChambeau has grown a relationship with Long Drive champion Martin Borgmeier who appeared in this YouTube upload. Borgmeier's highest ball speed is 231.9 mph.

Since being a part of the record-breaking US Ryder Cup win, DeChambeau has only appeared twice on the course. He was beaten by Brooks Koepka in The Match and he finished tied 14th at the Hero World Challenge, hosted by Tiger Woods.