The 28-year-old gave a seasoned, media response to how sure he is the big cat will make it to Augusta National. 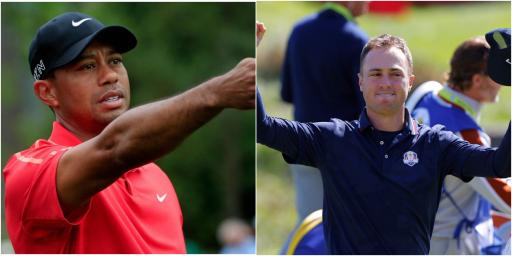 Thomas, 28, was described by Woods recently as like a brother to little Charlie.

The PGA Tour star spent a lot of time at Woods' home in Jupiter, Florida just hanging out as Woods recovered from his car crash this year.

He cranked up the speculation about Woods' chances of a comeback when he appeared on the No Laying Up podcast.

Thomas said he hoped Woods, 45, would at least try and play golf again.

But Thomas suggested he didn't think Woods would turn up to Augusta National after shooting mediocre rounds in the 70s at Medalist.

"That's just not gonna be him," he said. Weeks later we had the three-second making progress swing video.

Then he turned up to the Hero World Challenge with massive arms and ripped drivers on the range.

Now Thomas has been talking Tiger again ahead of the PNC Championship this weekend.

#NEW: Justin Thomas says he “hopes” that Tiger will be at Augusta as the comeback kicks into high gear, adds that “this week is big” for him: pic.twitter.com/CxNdpyt4zB

"Wow, yeah, that's not putting me on the spot at all. Um, I'm a 10 in hopes that he does but I have no idea. I can't honestly answer that. It's such a different animal than it will be this week. I'm sure he is going try but this is going to be a big week for him and, like I said, in terms of hopes I'm at a 10, I hope he is going to be there but you never know. So that's me not answering the question while answering it."