Cantlay's caddie on DeChambeau comment: "It added a little bit of SPICE!" 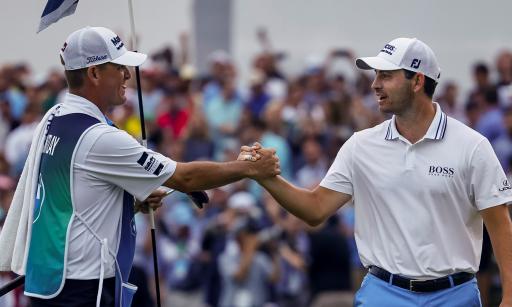 Patrick Cantlay's caddie Matt Minister has taken to Instagram to give his thoughts on Bryson DeChambeau telling his boss to "stop walking" at the 14th hole in the final round of the BMW Championship.

In Minister's eyes, DeChambeau's "Patrick, can you stop walking" comment added some "spice" to proceedings but at the same time was "no big deal."

WATCH MINISTER'S VIDEO BELOW ON THE CADDIE NETWORK ON INSTAGRAM

"The driving display Bryson put on on Sunday was nothing like I've ever seen - it was equally as good as Patrick's putting was, it was fun to watch," said Minister.

"The spiriti of all the fans, it was so exciting and they were behind both players, routing everyone on. it was a special atmosphere.

"A lot of people are making a big deal out of the 14th hole. It wasn't a big deal.

"It did add a little bit of spice to the telecast but we’re all pros out here and it’s not a big deal."

Cantlay went on to defeat DeChambeau with a birdie at the sixth extra hole to land his fifth career PGA Tour title and move to the top of the FedEx Cup standings heading into this week's season finale at the 30-man Tour Championship.

He will start the week on 10-under par, two shots ahead of Tony Finau and three clear of DeChambeau.

WATCH: BRYSON DECHAMBEAU IN HEATED EXCHANGE WITH GOLF FAN AS HE WALKS OFF THE 18TH GREEN AT THE BMW CHAMPIONSHIP