John Daly is in full agreement with Phil Mickelson that the maximum driver shaft length must not be reduced to 46 inches. 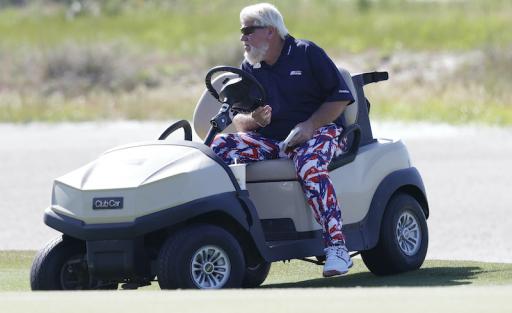 Two-time major champion John Daly has come out in support of Phil Mickelson's view that the maximum length of driver shafts must not be reduced to 46 inches from 48 inches.

Mickelson posted a tweet in protest against the rumours that the USGA will reduce the maximum length of drivers as part of their joint report with the R&A into driving distances.

"Word is USGA is soon rolling back driver length to 46inches. This is PATHETIC. 1st it promotes a shorter more violent swing (injury prone) doesn't allow for length of arc to create speed, and during our 1st golf boom in 40 years, our amateur gov body keeps trying to make it less fun," Lefty said on Twitter.

Daly responded to the six-time major champion to say that if the USGA want to restrict how far players can hit the ball, then they should focus on changing the ways in which golf balls are produced.

I totally agree with you brother but why don’t they just change the cheapest thing made in golf……the #golfball #bringthegolfballback NO common sense! https://t.co/3K9pAR0Qv9

"I totally agree with you brother but why don’t they just change the cheapest thing made in golf……the #golfball #bringthegolfballback NO common sense!" tweeted Daly to Mickelson.

John Daly burst on to the PGA Tour scene with his powerful, carefree style in 1991 when he won the PGA Championship as a wild card competitor at Crooked Stick Golf Club.

In the 1992 PGA Tour season, Daly hit the longest drive of the season of 308 yards. This seems an incomprehensible figure now that Bryson DeChambeau is the longest hitter on tour, who has averaged 323 yards in general in 2021.

Daly was one of golf's first power players and he became very popular for it. The 55-year-old believes the USGA are not using their common sense in regulating hitting distances.

In February, the R&A announced the proposals to reduce the maximum driver shaft length to 46 inches, which came a year after the Distance Insights Project report was published.

Although Daly and Mickelson have expressed their opposition to the idea, the rumours have not been confirmed as fact as of yet.

NEXT PAGE: PATRICK REED CONFIRMED TO TEE IT UP AT THE TOUR CHAMPIONSHIP