Lefty has confirmed he will be in the field among the likes of Ernie Els, Vijay Singh, Padraig Harrington and Steve Stricker. 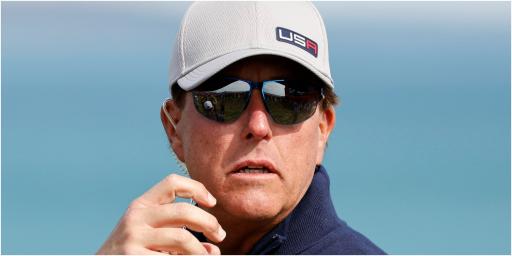 The field for Jim Furyk's PGA Tour Champions event has been finalised - and it is packed with talent.

If you were to look at this field a few decades ago you would be forgiven for sitting on your sofa all weekend watching the coverage.

Last Friday afternoon, the field for the upcoming Constellation Furyk & Friends was confirmed for the Timuquana Country Club.

The tournament is being held between 8-11 October.

There will nine members of the World Golf Hall of Fame and 21 major champions in a star-studded field.

Phil Mickelson, fresh off his stint as a vice-captain to Steve Stricker's successful Ryder Cup team, leads the way.

Ernie Els, Vijay Singh and Padraig Harrington are also in the field of 81 players which include 50 past PGA Tour winners.

The tournament is held over 54 holes with no cut where the winner will receive $300,000.

Furyk is hosting this new event, which will benefit the Jim Furyk and Tabitha Furyk Foundation.

"The Furyks have been tremendous leaders in this community for so long, and I know will be a great ambassador for this event, like the players before him who have hosted tournament in order to give back," said PGA Tour Champions President Miller Brady.

Other notables also scheduled to play include: