Could a solid QBE Shootout showing bring back the old Jason Day?

Jason Day has not won on the PGA Tour since 2018 and he has dropped out of the top 100 players in the world. 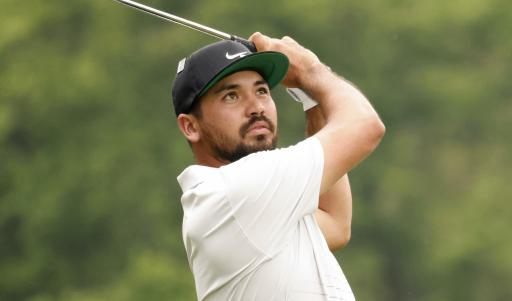 The QBE Shootout could be just the tonic needed for Jason Day. A relaxed, different event that doesn't bring the stress and pressure of a regular PGA Tour stop.

Playing alongside Marc Leishman, his fellow Aussie golfer, they hold a three-shot lead heading into the final round which is played in the better-ball format.

Although they would be disappointed not to win, Day just needs inspiration and some form to take confidence from. It has been a considerable amount of time since the 34-year-old showed sustained quality in his game.

In 22 events in the 2021 season, he made only three top-10 finishes. He missed nine cuts and three of these came consecutively at The Masters, the Wells Fargo Championship and the AT&T Byron Nelson.

RELATED: THIS JON RAHM DOPPELGÄNGER WILL MAKE YOUR DAY AS FANS JOKE: "HAS HE FOUND GOD?!"

He hasn't won on the PGA Tour since his victory at the Wells Fargo Championship in 2018. After missing the cut at the RSM Classic in November, he dropped out of the top 100 in the world rankings for the first time since 2010.

Recently, in the new YouTube show Home Course, Day showed us his incredible home golf complex in Columbus, Ohio. He showed us his practice facilities and how he endeavours to improve his game.

Maybe he is beginning to feel more comfortable with his game? He certainly looks as though he has found something alongside his friend Leishman in Florida this week.

The pair have 18 wins on the PGA Tour between them and their experience showed on Saturday in the greensomes format. They made six birdies and an eagle to reach 24-under-par.

A win would be fantastic for Day who is currently playing golf that is unrecognisable. In the 2015 and 2016 PGA Tour seasons, he notched up eight wins including the PGA Championship at Whistling Straits.

RELATED: BRYSON DECHAMBEAU: HAS HE FOUND THE HOLY GRAIL? PADRAIG HARRINGTON THINKS SO

His hot streak took him to the peak of the world rankings. Everything he touched turned to gold. He won the Arnold Palmer Invitational, the Dell Match Play and The Players Championship too.

He was the shining light of Australian golf alongside Adam Scott who also reached the summit with a win at The Masters in 2013.

Leishman and Cameron Smith have taken up the reins for their nation for now. Day is not getting any younger and perhaps we have seen the best of him.

But we know what he is capable of. His best golf is not a distant memory just yet and this week at the QBE Shootout could provide the inspiration he needed to rediscover his best golf.