Tommy Fleetwood spoke to Rick Shiels and Guy Charnock about all things golf and all things Tiger Woods. 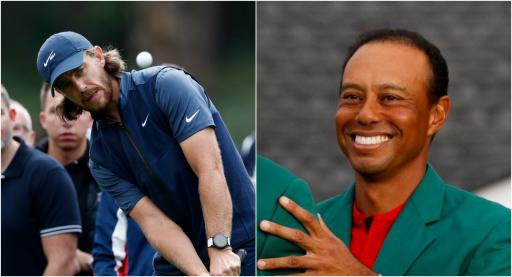 Tommy Fleetwood told Rick Shiels and Guy Charnock that Tiger Woods played the best round of golf that he has ever seen in 2019.

Fleetwood played alongside the 15-time major champion in the first round of the ZOZO Championship two years ago, and he described his pleasure of playing with Woods.

Woods shot a 66 on day one of the tournament, despite bogeying his first three holes and he went on to win in Japan. It was his 82nd PGA Tour win, beating the likes of Hideki Matsuyama and Rory McIlroy in the process.

"He hit shot after shot that was perfect and I was having one of those days where I was playing distinctly average, I'm grafting away to be around par or 1-over," Fleetwood said to Shiels and Charnock on The Rick Shiels Golf Show.

RELATED: COULD A SOLID QBE SHOOTOUT SHOWING BRING BACK THE OLD JASON DAY?

"At the end of the day, he taps in for his 66, nine birdies in his last 15 holes and he cruised to it. I shook his hand and I said, 'that was really good today Tiger'.

"Then he looked at me, he winked and he went 'How 'bout that huh?' He knows he's played well there, so that must be very, very good.

"He is so self-focused. It's not that you don't feel part of his round of golf, if he wants to talk he'll talk, but he's got that amazing focus that he's always had and it almost makes it easier for you."

The man from Southport also admitted that Woods is the best player he has ever played with, which is no surprise considering the 45-year-old is regarded by many as the best golfer ever.

RELATED: TIGER WOODS: HOW GOOD IS CHARLIE AT GOLF AND WHAT IS HIS CURRENT HANDICAP?

Although Fleetwood is yet to win on the PGA Tour, he did manage to take bragging rights over Woods a year previous to his win at the ZOZO Championship.

The 2018 Ryder Cup was arguably the best week of Fleetwood's career. Alongside Francesco Molinari, they beat Woods and his various partners three times in France.

The 30-year-old has been lucky enough to be drawn with Woods on a number of occasions in his career and it appears even Fleetwood is as star-struck by Woods as the rest of us.

NEXT PAGE: BRYSON DECHAMBEAU: HAS HE FOUND THE HOLY GRAIL? PADRAIG HARRINGTON THINKS SO