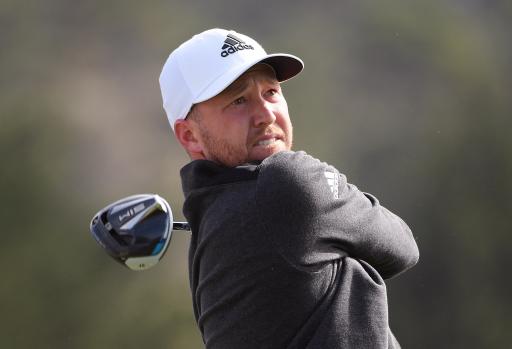 All the talk heading into the final round may have been about Jordan Spieth bidding to end a three-and-half-year wait for victory, but it was Daniel Berger who stole the headlines at the AT&T Pebble Beach Pro-Am by landing his fourth career title on the PGA Tour.

Berger, 27, eagled the final hole for a 7-under 65 to finish the week on 18-under par and two shots ahead of his US compatriot Maverick McNealy, who carded a respectable 66. WATCH Berger close out the win in style at 18 below:

Berger drove it out of bounds on the same hole on Saturday en route to a double-bogey seven to fall out of the lead, but he made amends on Sunday with his eagle bomb - a feat that marked only the second of the week on that hole.

The victory marks Berger's fourth career PGA Tour title, and incredibly his first win that hasn't been in the month of June.

"I feel like I got some revenge on 18 there," said Berger, who played the par-5s on Sunday in a phenomenal 6-under par.

"I hit maybe the best 3 wood I've ever hit in my life to find the green, and it was a great feeling when the ball went in. It's so hard to win out here, and everything just came together this week."

Spieth held a two-shot lead heading into Sunday but in similar fashion to his tie for fourth at the Phoenix Open last weekend, the three-time major champion failed to close out his first win since the 2017 Open Championship.

The 11-time PGA Tour champion finished with consecutive birdies at 17 and 18 but the damage was already done with a costly bogey-six at the par-5 14th, and Spieth went on to finish tied third with compatriot Patrick Cantlay - another player who will leave Pebble Beach disappointed having started the week with a 10-under 62.

Nate Lashley found himself in a tie for the lead with Berger with three holes to play but four-putted from 12 feet at 16 for a triple-bogey seven. He would go on to birdie the final hole to finish tied fifth with in-form Englishman Paul Casey.

NEXT PAGE: GOLF TO RETURN IN ENGLAND IN TWO-BALLS AT THE END OF MARCH

Golf news
Pro golfer makes an ALBATROSS to get into playoff, then takes down the win
Golf news
We've found him! THE MEANEST GREENKEEPER of all time!
Golf news
'This was a twist I didn't see coming': Golfer smashes COFFEE table doing drills
Golf news
'Hitting a drive for 45': Golfer SMACKS "500-yard" BOMB in front of Donald Trump
Golf news
PGA Merchandise Show RETURNS as an in-person event in January 2022