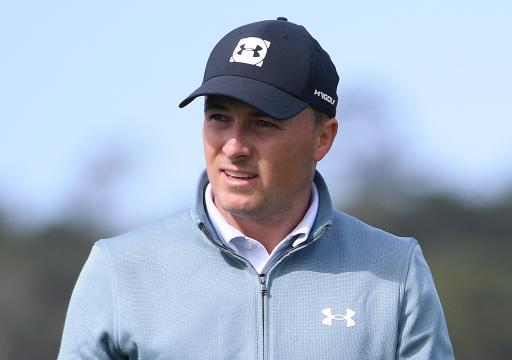 Jordan Spieth holed out for eagle for the second time in the week at Pebble Beach en route to moving into a two-stroke lead with 18 holes to play.

Spieth carded a 1-under 71 on a tricky third day of scoring to move to 13-under par, with his highlight of the day coming with a beautifully drawn 8-iron into the cup for an eagle-two at the par-4 16th. WATCH Spieth's moment of magic below:

The 11-time PGA Tour winner also made a hole-out eagle on day one at Pebble Beach - WATCH HERE. He becomes the first player since the 2003 staging of this tournament to hole out twice from outside of 100 yards during the week.

Spieth, who marked his resurgence with a tie for fourth at the Phoenix Open last week, will now have a golden opportunity to land his first title on the PGA Tour since winning the 2017 Open Championship at Royal Birkdale on Sunday. He also won this tournament the same year by four strokes on a 19-under par winning total.

The 27-year-old American will need to be on his game in the final round, however, as a host of players are chasing him down in a tie for second including pre-tournament favourite Patrick Cantlay, Daniel Berger, Nate Lashley and Tom Hoge.

Berger had been locked in a tie with Spieth until sending his tee shot out of bounds down the par-5 18th en route to a disastrous double-bogey seven.

Paul Casey, Jason Day, Brian Stuard and Maverick McNealy are three strokes back on 10-under par, with Max Homa and Will Gordon a further shot back on 9-under par.

Francesco Molinari produced one of the rarest moments ever seen on the PGA Tour when topping his opening drive 70 yards in front of him. WATCH the former Open champion's very bizarre moment below:

Stay dry out there today.

There are no breakfast balls on the PGA TOUR. pic.twitter.com/ARuLuiJfEr

Features
Danny Willett: The son of a vicar who lacked belief is back where he belongs
Ryder Cup
REVEALED: The biggest earners from the Ryder Cup on Instagram
Ryder Cup
Jordan Spieth's Ryder Cup putter STROP - We can all relate to this!
Ryder Cup
Ryder Cup 2020 VERDICT: "This is the GREATEST US Ryder Cup side of all time"
Ryder Cup
Does the Ryder Cup prove that golf hoodies are here to stay?