DeChambeau: I'm NOT trying to step on toes at World Long Drive Championship

"As much as you guys are talking about me I want to highlight these amazing talented individuals that are doing things I could only dream of." 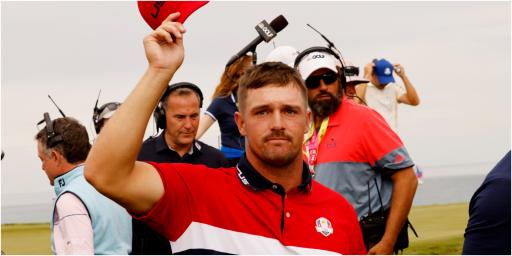 Bryson DeChambeau has said he hopes he has been well received by other competitors at the World Long Drive Championship.

DeChambeau advanced to the next stage of the competition with plenty of room to spare after he smashed a 412-yard drive in round one in Mesquite, Nevada on Tuesday.

The Ryder Cup winner did so into a stiff tailwind and will go again tonight live on YouTube amongst stellar company and former champion Kyle Berkshire.

DeChambeau won three of his first six-ball sets and finished in second in the other two out in the desert to a crowd cheering him on and a throng of media.

He was visibly hyped when he was smashing his drives and later told the media: "I hope I've been received okay.  I'm not trying to step on their toes.

"I want to showcase them, that's the most important thing I can tell you guys is that it's...as much as you guys are talking about me I want to highlight these amazing talented individuals that are doing things I could only dream of in regards to ball speed.

"So it's something I just wanted to hype up and get the world to see what this is because it's pretty special."

The message has been clear from @b_dechambeau. He wants to showcase all that long drive and these athletes have to offer. pic.twitter.com/UoEorvVzo4

RELATED: WHAT DO YOU DO IN THIS SITUATION?

DeChambeau got 800 points on day one, although it was estimated that 275-300 points would have been enough to advance.

He is among a group of 64 players to have advanced this far, with the field being chopped again to 32 for Thursday. In the final, there will be 16 competitors.

DeChambeau drove the first green at Whistling Straits at the Ryder Cup during the Sunday singles then holed the massive putt for eagle on his way to beating Sergio Garcia as United States beat Europe 19-9 to reclaim the trophy.

DeChambeau hits his drive onto the green at the par-four first and holes the 40-footer for eagle!